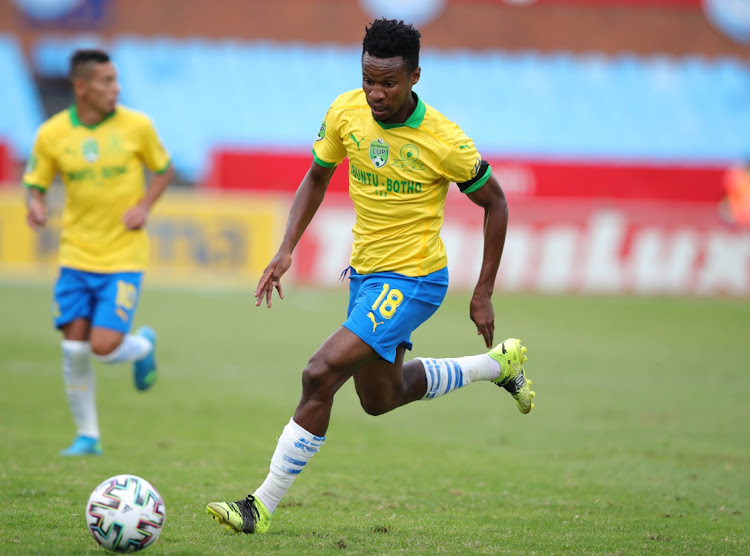 The group B match took place at a neutral venue in the Tanzanian capital Dar es Salaam after the fixture had to be postponed last week due to Algerian authorities denying Sundowns entry into the North African nation citing Covid-19 restrictions.

Sundowns were swiftly out of the blocks and had a hold on the match from the first whistle. They were rewarded for their relentless early push when Belouizdad centre-back Chouaib Keddad handled the ball inside the box.

Malian referee Boubou Traore did not hesitate to point to the penalty spot and flashed a red card. Zwane converted to put Sundowns ahead after five minutes at the Benjamin Mkapa Stadium.

The Brazilians were free-flowing and toyed with their opponents but a lapse of concentration by captain Ricardo Nascimento allowed Belouizdad attacker Amir Sayoud to sneak in behind him before cleverly chipping the ball over the advancing Denis Onyango in Sundowns goal to make it 1-1 at halftime.

Sundowns started the second half with the same intensity as in the first and before the Algerians knew it striker Peter Shalulile headed into the back of the net from a Lyle Lakay corner three minutes after the restart.

Zwane completed his brace in the 55th minute and Lebohang Maboe got in on the scoring riot to make it 4-1 with 15 minutes remaining to put the contest beyond the north Africans’ reach.

Kermit Erasmus made the defeat more humiliating for Belouizdad on the stroke of full-time to score his second goal in two Champions League matches.

Sundowns put on a masterclass showing throughout and the reigning SA champions hardly put a foot wrong as they suffocated the life out of their opponents.

The crushing victory puts Sundowns in a commanding position as they top group B on six points from two matches after their 2-0 triumph over Sudanese side Al Hilal in the opening round early in February.

Sudan’s Al Hilal and DR Congo’s TP Mazembe played out to a goalless draw in their Champions League group B match in Omdurman on Wednesday.

The result from Omdurman saw Mazembe collect their second point, having also played to the same result against Belouizdad in their opening game. Hilal picked up their first point of the competition, having lost 2-0 to 2016 champions Sundowns in their first match.

Pirates dominate the first half, while Supersport recovered in the second half to equalise
Sport
1 month ago
Next Article