None could capture the Birds this term 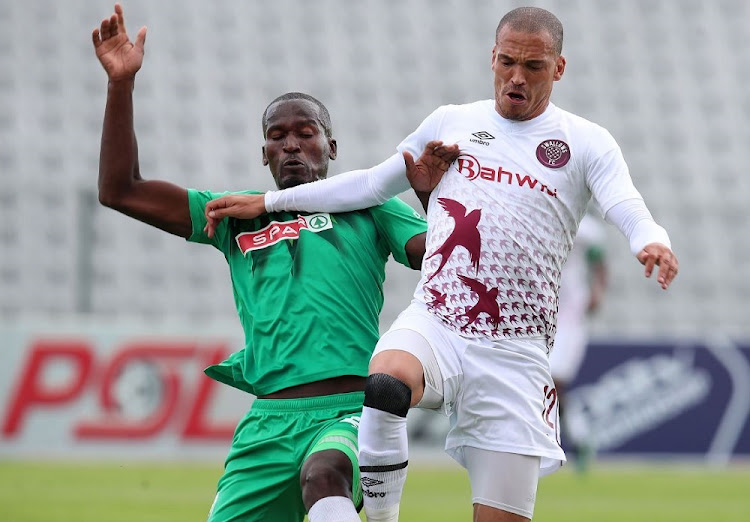 Ruzaigh Gamildien of Swallows FC is challenged by Tapelo Xoki of AmaZulu during the match between Swallows and AmaZulu at the Dobsonville Stadium in Soweto, February 14 2021. Picture: MUZI NTOMBELA/BACKPAGEPIX

Swallows made a little history on Sunday when their Premier Soccer League (PSL) match against AmaZulu at the Dobsonville Stadium ended in a goalless draw.

The Dube Birds became the first club promoted from the First Division to the PSL to complete their first round of fixtures unbeaten.

Swallows have been cruising in the PSL since coming up and remain one of two clubs with champions Mamelodi Sundowns yet to lose in the league this term.

Sunday’s stalemate against AmaZulu was a drab affair with few highlights. Lehlohonolo Majoro came close for the visitors early on while Swallows threatened after good work from Kgaogelo Sekgota on the left picked out Lebohang Mokoena who nodded over the bar.

As the match headed to a close, the struggle up front for either side continued with many balls into the area leading to nought in Dobsonville.

• It wasn’t the Valentine’s Day gift that Jwaneng Galaxy were hoping for after they were punished by visitors Orlando Pirates in a Caf Confederation Cup first leg play-off match in Botswana on Sunday.

Pirates handed their hosts a 3-0 beating in a match that moved the SA side a step closer to the group stages of the continental tournament.

A first half header from defender Thulani Hlatshwayo got the ball rolling after he powered home the opener after a corner kick from Deon Hotto in the 32nd minute.

Two goals in the second half from Linda Mntambo and Jean-Marc Mundele secured a comfortable win for the Bucs.

Chiefs’ trip to Morocco called off, match in limbo