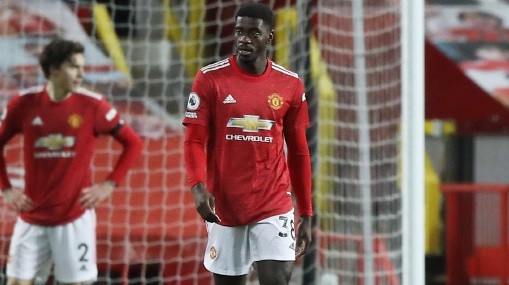 Manchester — Manchester United defender Axel Tuanzebe was subjected to racist abuse on social media once again after Saturday’s 3-3 draw with Everton in the Premier League.

Tuanzebe, 23, did not start the game at Old Trafford but came on as a late substitute and conceded the free kick from which Carlo Ancelotti’s side equalised deep into stoppage time. The former England under-21 defender was also targeted after United’s shock 2-1 home defeat by Sheffield United in January.

The Football Association on Sunday called for the British government and social media companies to act quickly in the fight against online racist abuse.

“We will continue to do everything we can to stamp discrimination out of the game, but we implore government to act quickly and bring in the appropriate legislation so this abuse has real-life consequences,” the governing body said.

“Social media companies need to step up and take accountability and action to ban abusers from their platforms, gather evidence that can lead to prosecution and support making their platforms free from this type of abhorrent abuse.”

A number of Premier League clubs have also called on social media companies to take stricter action against users who send abusive messages. But Chelsea defender Antonio Rudiger does not expect much to change.

“If more people are making accounts, I think they make money off it. So, me personally, I don’t think these people care,” Rudiger, who has been targeted by Chelsea fans, told reporters.

“As you know, this money has power and the rest doesn’t matter. It’s hard to tell if people [in charge of platforms] will make a change. I feel sorry for that. But I feel more sorry for those who are not strong enough, if it really affects them.”

The Professional Footballers’ Association has said that those who send abusive messages should be held accountable by authorities and have their social media accounts banned. Reuters

Visitors from lower-tier league claim a famous victory against one of SA’s most illustrious clubs, whacking in the winner in the 90th minute
Sport
9 months ago