Pitso Mosimane wary of next game against ‘rested’ Pirates 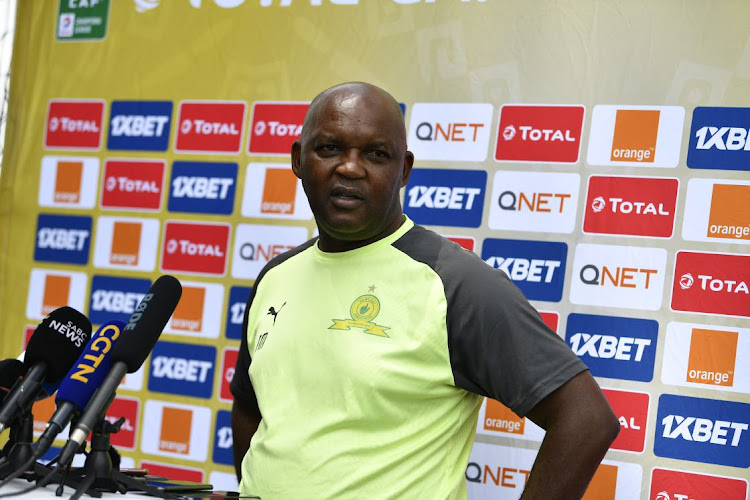 Mamelodi Sundowns coach Pitso Mosimane has pleaded for calm and said the club’s fans should humble themselves after the Pretoria side moved to within striking distance of the top of the table.

A third successive league title is now a distinct possibility for Mosimane’s Brazilians after a dogged  1-0 win on Wednesday night away at Stellenbosch FC.

It put second-placed Sundowns four points behind Chiefs with one game in hand‚ which will come next Tuesday when they host Orlando Pirates at Loftus Versfeld in Pretoria.

But Mosimane insisted: “The league is decided in May. We need to keep our feet on the ground.”

But his intent was made all too clear when he added: “We are holding on to the trophy and we don’t want to let it out of the cabinet. We are still seeing it‚ we still love it so we cannot release it. So we are trying to protect it.

“But the game in hand doesn’t mean anything. We had two games in hand but at least we got rid of one.

“Only until you get rid of that game in hand‚ and you’ve won it‚ then you can start looking at the table differently.”

When they play Pirates on Tuesday‚ it will be a fourth game in 10 days for Sundowns‚ Mosimane pointed out‚ while their opponents will go into the game after a 10-day break.

“It’s very difficult for us because we are playing against rested teams. I heard the coach of Orlando Pirates talking about our game and I was surprised. But what I forgot is that it is their next game but I still had Stellenbosch and Highlands before that. When I realised I said: ‘OK‚ they are going to be well rested’.”

Mosimane said his side battled with tiredness throughout the hard-fought victory over Stellenbosch. “The two legs against Al Ahly and trying to fight back took a lot out of us‚” he added.

Mosimane praised a “brave” approach from Stellenbosch coach Steve Barker. “They gave us a scare, but we know how to deal with stress and pressure‚” he said.

Itumeleng Khune and Andile Jali back in the Bafana Bafana picture

No Moroka, even if Swallows win promotion

Itumeleng Khune and Andile Jali back in the Bafana Bafana picture

No Moroka, even if Swallows win promotion