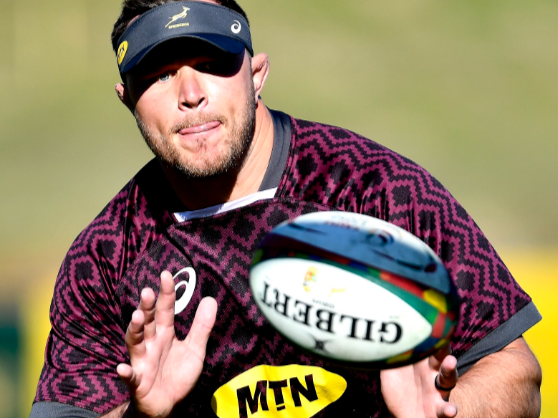 No 8 Duane Vermeulen returns to the Springboks starting 15 against Australia on Sunday. Picture: GALLO IMAGES/ASHLEY VLOTMAN

Imposing Springboks No 8 Duane Vermeulen will return to the starting lineup for the first time since the 2019 Rugby World Cup final when SA take on Australia.

The Boks resume their Rugby Championship campaign against the Wallabies at the CBUS Super Stadium in Gold Coast on Sunday.

The vastly experienced No 8, who joined the Springbok squad at the start of the Lions Series in August but has yet to play a match, has fully recovered from an ankle injury he sustained earlier this year.

Scrumhalves Faf de Klerk (leg strain) and Herschel Jantjies (hip pointer) and flanker Marco van Staden (ankle) are also back from injury as Springbok coach Jacques Nienaber made 13 changes to his match-day squad for the clash.

Seven of those changes are in the starting line-up and six on the replacements bench.

Five of the changes to the starting team that defeated Argentina 29-10 in the second round in Nelson Mandela Bay were among the forwards.

Vermeulen takes over from Jasper Wiese at the back of the scrum and Eben Etzebeth comes in for Marvin Orie at lock, while a new front row of Steven Kitshoff, Frans Malherbe (both props) and Bongi Mbonambi (hooker) will be in action.

The two changes in the backline are on the right wing where Sbu Nkosi replaces Cheslin Kolbe, who took a knock to the leg at training, and at scrumhalf, where De Klerk returns for the first time since the second Test against the British & Irish Lions in place of Cobus Reinach.

Nienaber was pleased to have a handful of players back from injury as the Springboks embark on a challenging four-week stretch to defend their Rugby Championship title, with back-to-back Tests against Australia before successive encounters against New Zealand.

“We have been following the progress of the injured players daily, so we knew that we would be in a position to select most of them for this match,” said Nienaber.

“Duane has played an active role off the field in our team meetings and with the analysis of the opposition, and he has also provided guidance at training. He returned to full training when we arrived in Australia, so he has been in the thick of things for a while now.

“Duane, Faf and Herschel are Rugby World Cup winners, and so is Eben, who is back after we rotated him to manage his workload, while Marco has made a strong impact on the field this season as well, so we are pleased to have them back in the fold.

“Australia pose a strong threat with their running rugby and they like to keep the ball in play. They will also be playing in front of a charged-up home crowd, so it will be good to have these experienced players back as they know what it takes to perform in big matches.

“Unfortunately, we lost Cheslin to injury, but we are fortunate to have Sbu who steps in. He has been working hard at training and is eager to get back on the field.”

With the Springboks’ last Test being almost three weeks ago, Nienaber said it is important for the team to hit the ground running against Australia to maintain the momentum they have built up this season.

“We had sufficient time since our last Test to give the players a break after the physically taxing start to the season, and to work in a hard conditioning week before we tackle the remaining four Rugby Championship matches,” said Nienaber.

“We will be tested thoroughly in the next four weeks, so we have to be up for the challenge mentally and physically. There are also trophies such as the Nelson Mandela Challenge Plate and the Freedom Cup up for grabs, so we will prepare well and give our best on the field.”

Luke Pearce (England) has been appointed the match referee, with Australia’s Damon Murphy and Jordan Way serving as assistant referees, and England’s Matthew Carley the TMO.