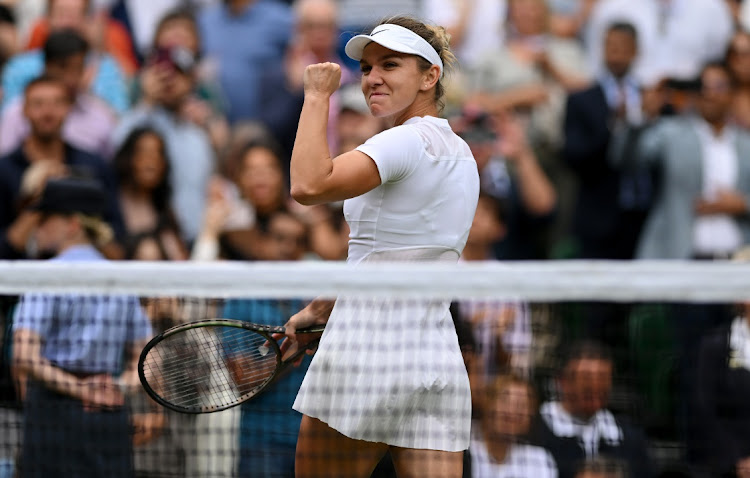 Simona Halep of Romania celebrates winning match point against Amanda Anisimova of the US during their match at Wimbledon in London, England, July 7 2022. Picture: SHAUN BOTTERILL/GETTY IMAGES

London - For almost 45 minutes, Simona Halep handed out a public flogging to a shell-shocked Amanda Anisimova in their Wimbledon quarterfinal on Wednesday.

It was getting so bad for Anisimova, her fellow American John McEnroe quipped while commentating: “This is bordering on embarrassing ... this will be over in 10 minutes.”

McEnroe's prediction was a little off but 2019 champion Halep will be fancying her chances of reaching a second Wimbledon final in three editions after subjecting a red-faced Anisimova to a 6-2 6-4 mauling on Centre Court.

“It’s great to be back in the semifinals. I'm very emotional right now. It means a lot,” the beaming Romanian told the crowd after setting up a last-four showdown with 17th seed Elena Rybakina of Kazakhstan.

For Anisimova, everything that could go wrong, went wrong.

The 20-year-old American had struck a tournament-leading 108 winners coming into the quarterfinals, but those shots were in short supply against an opponent who feels at home on grass and has not dropped a set in these championships.

From 1-1 in the opening set, Halep won five games in a row in a breathtaking performance that seemed to impress the likes of Rod Laver, Stefan Edberg and David Beckham watching on from the Royal Box.

Anisimova was eight years old when Halep made her Grand Slam debut at Roland Garros in 2010 and the Romanian made that experience count as she capitalised on her opponent's mounting unforced errors to seal the first set in only 30 minutes.

There seemed to be no respite for Anisimova in the second.

A backhand error handed Halep the break in the third game and when the Romanian broke for the fourth time to take a 6-2 4-1 lead, a tormented Anisimova appeared to be on the verge of tears and expressed her disgust by rejecting one racket after another into her red bag.

“My arm was just non-existent today. I just couldn’t feel it. I was just missing such easy returns,” said a dejected Anisimova, who had defeated Halep en route to the Roland Garros semifinals in 2019.

“I just felt very stiff and frozen. I got very emotional in the chair because I wasn’t performing very well ... especially in such a packed stadium. It’s very disappointing for me. So I was very upset.”

That she ended up keeping Halep engaged on Centre Court past the hour mark was an accomplishment in itself because for the majority of match, fans who had forked out £175 for a Centre Court ticket must have felt rather short-changed.

Staring at defeat at 5-1 down, the American managed to win three games on the trot for the first time in the contest, including breaking the 2019 champion when she went to serve for the match.

Two games later Anisimova had Halep 0-40 down again when she made a second attempt to serve out the victory.

But a few hard-hitting slaps to her thigh got Halep’s legs moving again and she secured the win when Anisimova swiped a backhand long.

“I played a tough opponent today — she could crunch the ball in the end,” 16th seed Halep said after reaching her third semifinal at the All England Club.

“I had to stay strong on my legs — they helped me today. I also needed my serve — everything was good, and it finished well.” Reuters