Huge surprise as Kommetdieding heads for the highveld 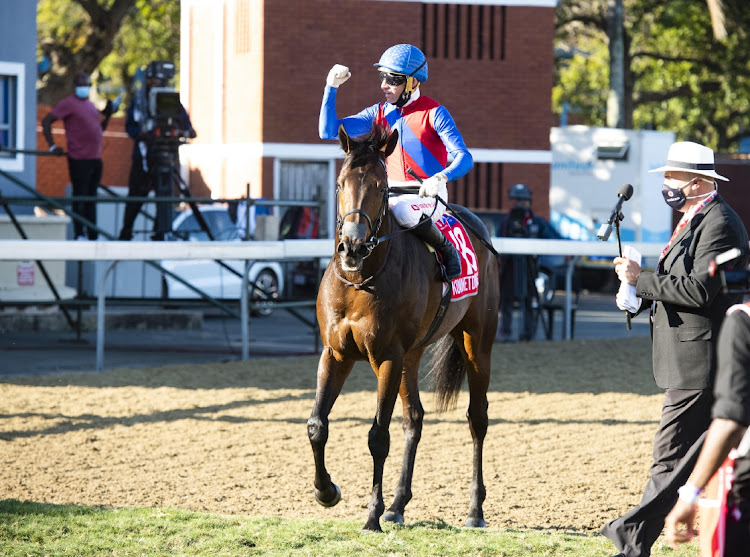 As the TV channels are fond of saying, “Breaking News”: Durban July and Cape Met winner Kommetdieding, the most popular horse in the country, will be off to the highveld shortly to contest two grade 1 races.

This is hugely exciting news for Gauteng racing fans who have been confined to watching the horse’s big race triumphs on television. Kommetdieding will be targeting the Horse Chestnut Stakes and the Premier’s Champions Challenge.

Business Day learnt of this exciting news from Michelle Rix who trains Kommetdieding in partnership with her father Harold Crawford, who has little contact with the media.

“After the Met, we made it known that we intended to send Kommetdieding to the farm to rest and then prepare him for another KwaZulu-Natal campaign,” said Rix. “However, he came out of the Met so well that we had a rethink and we’re now headed for Joburg.

“We’ve conquered KwaZulu-Natal, conquered the Cape and now we must see if we can conquer Gauteng as well,” she said.

Rix feels the Turffontein track will suit her champion down to the ground. “He should love the long straight which will give him time to get into top gear.”

One wonders who stands in the way of Kommetdieding adding to his bankroll with two more big race wins. The other placed horses in the Met Jet Dark, Linebacker and Double Superlative look unlikely to make the journey to the highveld.

Second Base did run second in 2021’s Premier’s Champions Challenge but the four-year-old finished five lengths behind Kommetdieding in the Met.

The owners of Do It Again, a creditable fifth in the Met, might be tempted to journey north with their seven-year-old as his Kenilworth run indicated there is still life in the dual Durban July winner.

Another July success — if he does take his chance at Greyville — looks unlikely against younger improving rivals.

Altogether 166 lots of the 188 catalogued were sold. “The clearing rate was excellent with the aggregate showing a significant upturn,” said Knowles.

Top price at the sale was R2m bid by bloodstock consultant John Freeman for a Twice Over colt consigned by Klawervlei Stud, whose 47 yearlings grossed R16.47m with an average of R350,531.

The highest-priced yearling is the fourth produce of the mare Jet Set Model, a daughter of Jet Master. William Longsword, a reasonably new addition to the stallion ranks, emerged as the sale’s top sire with his 25 yearlings grossing R5.98m at an average of R239,400.

Many of the experts at Sunday’s sale felt that another Klawervlei offering, a Rafeef colt out of a Captain Al mare, was the best conformed yearling in the catalogue. Form Bloodstock agreed and beat off several bidders to secure the youngster for R1.7m.

Correction: February 12 2022
An earlier version of this story referred to Michelle Rix as assistant trainer to her father Harold Crawford. Kommetdieding is in fact trained in partnership by Rix and Crawford. The name of one of the races targeted has also been corrected to the Premier’s Champions Challenge.