Paddler ‘ready for plans A, B and C’ on solo voyage to Brazil 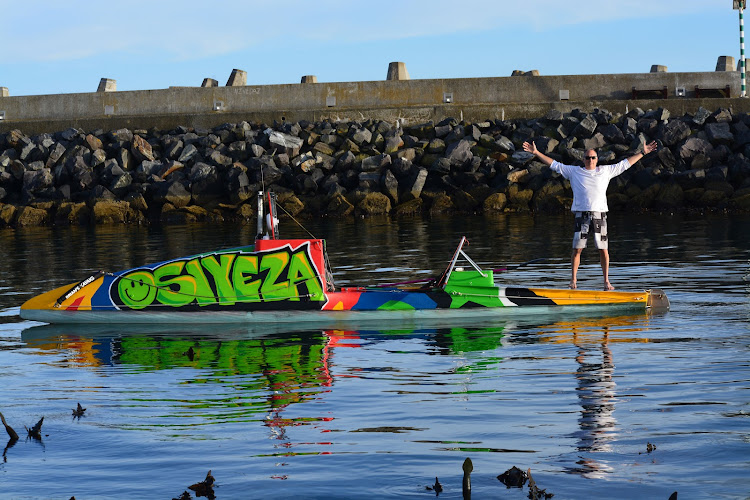 Richard Kohler is preparing for his solo paddle across the South Atlantic Ocean in his customised surfski, Osiyeza. Picture: GAMEPLAN MEDIA

Intrepid adventurer Richard Kohler is just days away from leaving Cape Town for a solo surfski paddle across the South Atlantic to Salvador in Brazil, aiming to become the first person to complete the 7,000-mile journey alone and unsupported.

Kohler, 52, will be paddling a specially designed surfski named “Osiyeza”, after the Johnny Clegg song The Crossing, aiming to raise money and awareness for the Operation Smile charity.

Kohler’s unique 8m-long craft has been modelled around a traditional surfski that he paddles frequently, modified to accommodate a hatch that will house his essentials and allow him to sleep. His paddles are substantially longer than traditional surfski paddles to enable him to reach over the unusually wide ski.

He plans on paddling about 15 hours a day, aiming to cover 100km daily and to take between 70 and 90 days to reach Salvador, but hoping it could take 60 days or less if all the conditions work in his favour.

“I am hoping for two months of downwind paddling bliss,” he said.

Kohler is finishing up the last of the paperwork that needs to be done, including setting up his emergency beacon communication system to make sure he can reach out for help if he runs into trouble.

“For every possible problem I have a plan A, plan B and a plan C,” he said, adding that the one issue that might threaten his record bid would be if the machine for making fresh water fails.

“Even then I will be able to harvest rainwater and make a plan. Running out of water is a potential showstopper.”

Fully loaded, his enlarged surfski will weight 450kg and can cruise at about 6-7km/h.

He will carry 90kg of food on board and plans a diet of dried “space food” supplemented with fats from olive oil, coconut oil, medium-chain triglycerides oil and macadamia oil. “In effect, an athlete keto diet,” says Kohler.

He won’t be relying on catching fish to eat, though he concedes that he will be dragging a fishing line from his boat. “Mostly as a form of entertainment and to deal with the boredom.”

Having undertaken similar adventures before, including becoming the first person to paddle the entire length of the SA coastline in a surfski, he has a plan to deal with the physical demands of the adventure.

“Like ultra-paddler adventurers such as Freya Hoffmeister, I like to go into the journey undercooked and get fitter as I go along. I accept that there is nothing you can do about the muscle pains, the blisters and the chafing. You just have to deal with it. Mentally, you tend to find the first 10 days are pretty miserable and then you adapt.”

As a seasoned ocean sailor and paddler, he is ready for any conditions that he might encounter in the South Atlantic.

The bank of solar panels on the back deck of his ski will provide a huge 460 watts of power to run his equipment, powering his cooking and communication gear.

“I have a fantastic comms set-up and on-board Wi-Fi,” he said. “But with data via satellite costing around R10,000 a gig, I have to be sensible.”

Kohler is waiting for favourable weather to set off on his trip, which in all likelihood will be around mid-December.