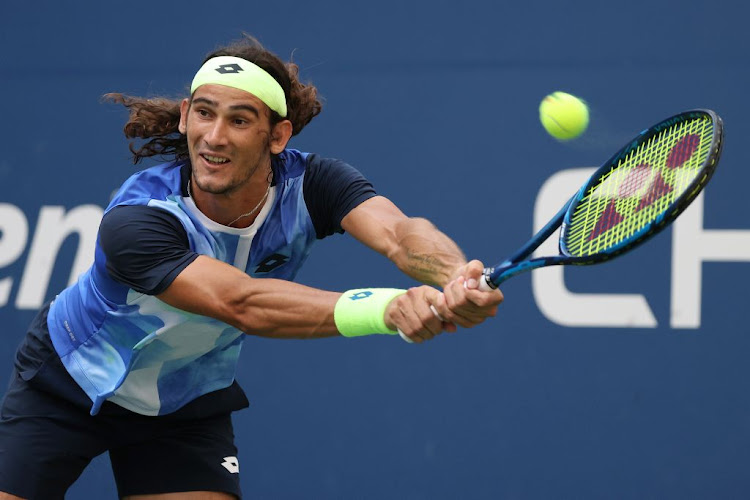 Lloyd Harris returns against Reilly Opelka of the US during their men’s singles round of 16 match at the 2021 US Open at Billie Jean King National Tennis Centre in New York, the US, on September 6 2021. Picture: AL BELLO/GETTY IMAGES

Rising SA tennis star Lloyd Harris has confirmed his commitment to playing for his country in the Davis Cup despite his increasingly congested schedule on the ATP Tour.

The 24-year-old, who last week became the first South African to reach the men’s singles quarterfinal at the US Open since Kevin Anderson in 2017, will lead SA against Venezuela in their Davis Cup Group II tie in New York this weekend.

He goes into the tie on a high after his US Open exploits, where he went down in three sets to German Alexander Zverev 7-6 (8/6) 6-3 6-4 in the  quarterfinal.

Recent highlights include Harris’s stunning 6-4 1-6 6-4 win over Spanish legend Rafael Nadal at the Washington Open in August and knocking over Austrian star Dominic Thiem 6-3 6-4 in Dubai in March.

“If your ranking goes up, the schedule becomes more compact and you have more commitments and more places to be,” he said.

“I don’t think I have missed a Davis Cup tie over the past four years ever since I have been part of this squad. It has been really important to me and that’s why I am playing — ultimately I would love for us to keep playing and winning and eventually get to the World Group. It would be a huge achievement to reach the World Group and for SA to compete against the best once again.

“I think that is something we should strive for as a team because it would be massive for tennis in our country given how big that stage is and how big are the countries that we will be competing with.

“Hopefully everything works out, I can play all the ties and we can make it all the way to the World Group. That is my dream, but you never know how things will work out.”

Venezuela is not one of the major tennis nations. Harris said he had done some homework on them and they have a fairly balanced team.

“I checked their players when they released the names and it seems they have more veterans who have played a lot of ties and have been around a while,” he said. “They also have some younger guys who are coming out of college. They have a solid team all round and they have done really well in the Davis Cup over the years.

Emma Raducanu, 18, says she hasn’t even checked her phone after stunning the sports world with her US Open victory
Sport
10 months ago

Harnessing the energy generated by New York's raucous fans, Fernandez has knocked out a string of big names on her way to the last four.
Sport
11 months ago
Next Article