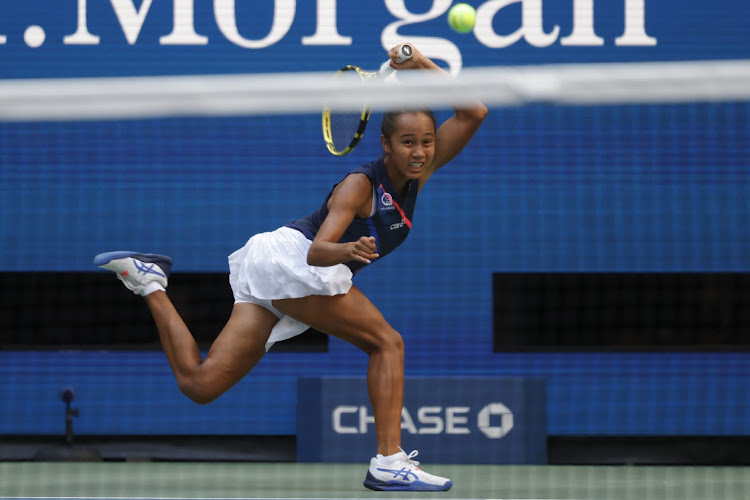 Leylah Fernandez of Canada sets up match point with a forehand against Elina Svitolina of Ukraine in a third set tiebreaker at the US Open at USTA Billie Jean King National Tennis Centre in Flushing, New York, on Tuesday. Picture: USA TODAY SPORTS/ GEOFF BURKE

After the Covid-19 pandemic left the stands empty in 2020, the US Open has welcomed tennis-starved fans back to Flushing Meadows, and Canadian teenager Leylah Fernandez has ridden a wave of support all the way to the semifinals.

On Tuesday, it was fifth seed Elina Svitolina’s turn to be sent packing by the 19-year-old’s racket, Fernandez winning a quarterfinal nail-biter 6-3 3-6 7-6(5) on the sport’s biggest stage, Arthur Ashe Stadium.

“Thanks to you guys, to the crowd, to the New York crowd, cheering me on, fighting for me and never giving up on me,” she said. “Thanks to you, I was able to push through today.”

After a year without spectators, players said the crowds seemed louder and more engaged.

While at Wimbledon you can hear a pin drop on centre court, a constant buzz provides the background soundtrack on Arthur Ashe Stadium and the crowd is never shy about expressing their feelings.

For Fernandez, tapping into the crowd is something she says she has worked hard at, yet it seems so instinctive.

Her natural enthusiasm combined with a fearlessness and attacking style have made her a Flushing Meadows darling. Her fan club continues to grow, with Canadian Prime Minister Justin Trudeau and NBA-great Magic Johnson congratulating and praising her on social media.

“Over the years I’ve been learning how to use the crowd’s energy, how to use it to my advantage even though they’re cheering against me, to use it,”  Fernandez said.

“I think it’s something from inside of me because from a very young age I always wanted to be on the first court playing in front of parents.

“Even though they were not watching, I wanted to be in the first court.

“Even in school, apart from presentations in front of the class that I hated, but when I had to ... do a mini play, sing, dance, I would go out there, have fun.”

Fernandez has masterfully worked the crowd in each of her matches, asking for their support, windmilling her arms and urging them to cheer when she feels she has given them something to cheer about.

A clenched fist thrust into the air after a winning point has quickly become her trademark.

And Fernandez will probably need the crowd on her side more than ever on Thursday when she meets second seed Aryna Sabalenka for a spot in the final.

“Coming to New York one of my goals was to come out of my shell and be more outgoing, and I have been improving every day and it shows on court,” Fernandez said.

“I was very sad there was no crowd last year.”