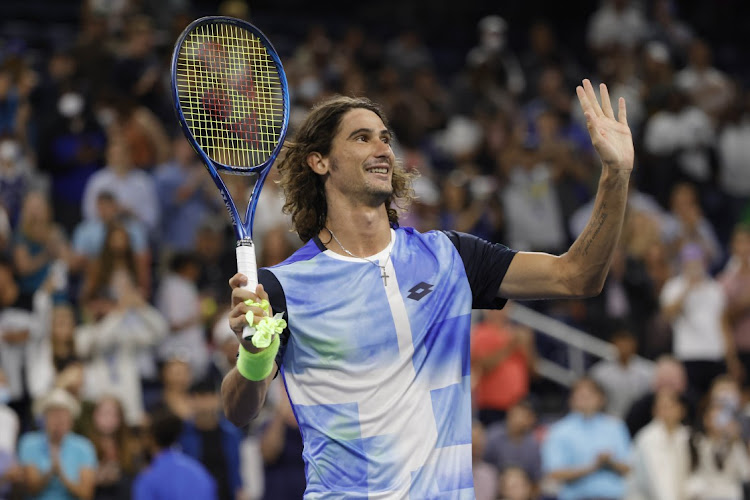 Lloyd Harris waves to the crowd after his match against Denis Shapovalov of Canada at the 2021 US Open tennis tournament. Picture: GEOFF BURKE/USA TODAY SPORT

The 24-year-old Harris, whose previous best performance at a Major was his run to the third round of the Australian Open earlier this year, will next face fourth seed Alexander Zverev for a place in the semifinals.

Harris, who dispatched seventh seed Denis Shapovalov in straight sets in the previous round, won an incredible 92% of his first-serve points, smashing 36 aces and 62 winners to seize the initiative against Opelka.

“It was a really tough match,” Harris said. “Reilly is always going to come with a lot of big serves, that’s for sure. I think I handled it well… I held my composure. I served really well throughout the match. All in all, I’m just very, very pleased and very relieved after that performance.”

Harris had the best of the early exchanges, but neither player was able to gain a clear advantage until the South African pounced midway through the opening set to break Opelka’s booming serve and take a 5-4 lead.

Opelka broke straight back and held his nerve in the ensuing tiebreak to go 1-0 up in the match, but that was as good as it got for the 22nd seed.

The second set stayed on serve until the very last game, with Harris getting the crucial break to level the match, before turning up the heat and pulling away from his opponent in the final two sets.

He broke Opelka six times in the match, while only losing his serve once, keeping things tidy with just 16 unforced errors to close out the best result of his career.

The 2.1m tall Opelka packs one of the most powerful serves on the men’s tour, but struggled to bring his most potent weapon to bear on the contest, landing only 65% of his first serves, though he still managed 24 aces.

An out-of-sorts Novak Djokovic scraped his way to a 1-6 6-3 6-2 6-2 win over US wild card Jenson Brooksby on Monday to move into the  quarterfinals and three wins from tennis immortality.

Chasing a 21st Major that would seal a calendar year Grand Slam, Djokovic had difficulty getting into gear against the 99th ranked Brooksby, who for a moment looked capable of derailing the Serb.

For the second consecutive match the world No 1 came out flat and dropped the opening set, something he will not want to do in his quarterfinal when he faces Italian Matteo Berrettini in a rematch of the Wimbledon final, which he won in four.

The sixth seeded Italian will mark a big step up in quality for Djokovic, who has faced  a qualifier and a wild card and no-one else ranked inside the top 50.

“I’ve played him quite a few times on different surfaces, I know what to expect. We’re going to play the third Grand Slam in a row against each other. Hopefully the result will be the same like the previous two.”