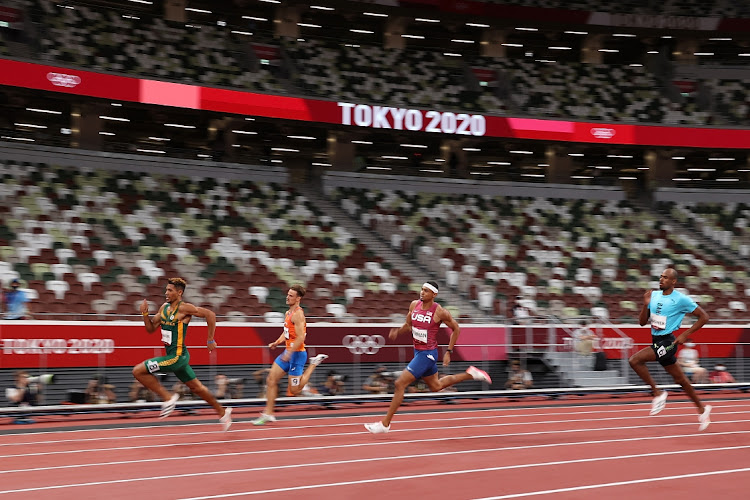 Wayde van Niekerk’s defence of his Olympic 400m crown ended in disappointment at the Tokyo Games as he crashed out in the semifinals on Monday night.

He might still compete further in the showpiece, however, indicating he would consider joining the injury-hit 4x100m relay team later in the week.

“Obviously very disappointed with the run,” Van Niekerk said. “Expected way more from myself but it didn’t work out the way I would have liked it to work. It is what it is and we move forward.”

Van Niekerk competed in a stacked semifinal that was by far the toughest race of his comeback to date.

After undergoing surgery to rebuild his broken right knee in late 2017, he returned to the track seriously only in 2020. This was  just his seventh one-lap race since then and the rust and lack of conditioning was obvious.

The 29-year-old had showed some good speed in a few 200m races early this season, but in all four of his 400m races in 2021 he lacked the late kick that had once been an integral part of his arsenal.

Would he have done better had he stayed with long-time coach Tannie Ans Botha in Bloemfontein? His decision to switch to US mentor Lance Brauman at the beginning of the year was complicated by the pandemic, which delayed his departure by a few months and forced him to train on his own. He will have to assess where his campaign went wrong.

Van Niekerk, owner of the 43.03sec world record, had needed to finish in the top two of his semifinal to qualify automatically. At worst he needed to clock one of the next two fastest times to advance to Thursday’s final.

But the double world champion from 2015 and 2017 grimaced as he came out of the final bend and was unable to battle his faster rivals, crossing the line in 45.14sec.

Van Niekerk’s form was untested coming into Tokyo, but he was still considered one of Team SA’s 13 medal contenders. So far only swimmer Tatjana Schoenmaker converted with her double strike in the pool.

Eleven of SA’s prospects have missed the podium already, and just the men’s 4x100m relay team remains, with the heats set for Thursday. Van Niekerk could be a good replacement for Gift Leotlela, who injured his hamstring in Sunday’s 100m semifinals.

The surfing silver by Bianca Buitendag last week was unexpected, and Team SA will be praying for more success from other outliers, perhaps in the marathons or open-water swimming.

Ashleigh Buhai in the women’s golf tournament? What about the sport climbers?

While the men’s 400m of this showpiece presented Van Niekerk with an unhappy ending, it could deliver a heartwarming finale for Grenada’s 28-year-old Kirani James, the London 2012 champion and Rio 2016 runner-up who won his semifinal in the fastest time of the day, 43.88.

Colombia’s Anthony Jose Zambrano was second behind him in 43.93. American Michael Cherry was the third semifinal winner in 44.44, followed by Jamaica’s Christopher Taylor in 44.92.

Van Niekerk’s 44.56 season’s best would have won him a lane in the final. Instead, his effort on the night ranked 12th out of the 23 competitors.​

The sprinter says while he is disappointed, Italian Lamont Marcell Jacobs deserved to win
Sport
1 month ago