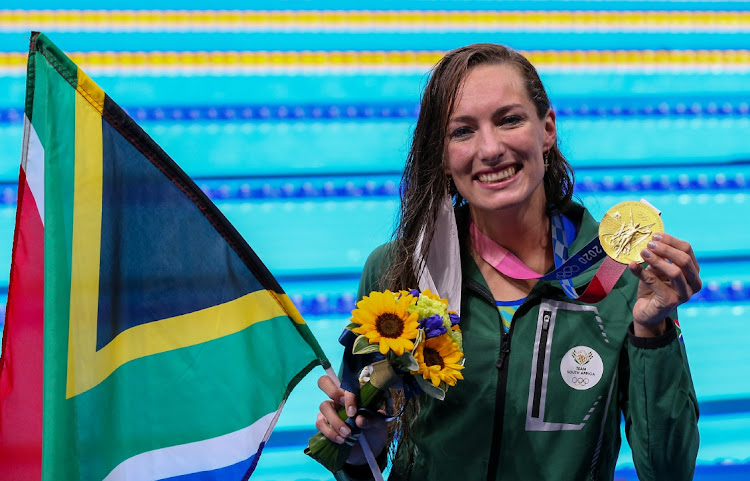 Tatjana Schoenmaker with her gold medal in the women’s 200m breaststroke during the swimming event on day seven of the Tokyo 2020 Olympic Games at the Tokyo Aquatics Centre on July 30, 2021 Tokyo, Japan. Picture: AGLLO IMAGES/ROGER SEDRES

Tatjana Schoenmaker scooped SA’s first gold medal of the Tokyo Games as she won the women’s 200m breaststroke in a world record on Friday morning.

Schoenmaker screamed with delight when she caught sight of her 2 minute 18.95 second mark, the first individual world record of this gala. and wept with joy as she was congratulated by the American silver and bronze medallists, Lilly King and Annie Lazor, and her fifth-placed Tuks teammate Kaylene Corbett.

King, in lane two, set the early pace and had the lead at the halfway mark, but Schoenmaker remained steadfast in executing her strategy, reeling in the American on the third lap and then pushing for the win and dipping under 2:19.00 for the first time in history.

Schoenmaker, who took the 100m breaststroke silver on Tuesday, is only the tenth South African to have won multiple medals at a single Games, and the fourth since readmission, after Penny Heyns (Atlanta 1996), Roland Schoeman (Athens 2004) and Chad Le Clos, who achieved it twice (London 2012, Rio 2016).

Speaking after the race, she said her goal at the games was to just try her best and hopefully make the final.

“If I could just make the final, that was what I said since I started coming, to make the final is already an amazing achievement.

“I was lucky to have my teammate [Kaylene Corbett] there. We were all two, too — two Americans, two British, two South Africans [in the final]  — so it was just amazing to have that teammate there.”

In SA’s Olympic outfits, local designers have claimed, reclaimed, mashed up and mangled the symbols of our past. That’s a good thing
Features
11 months ago