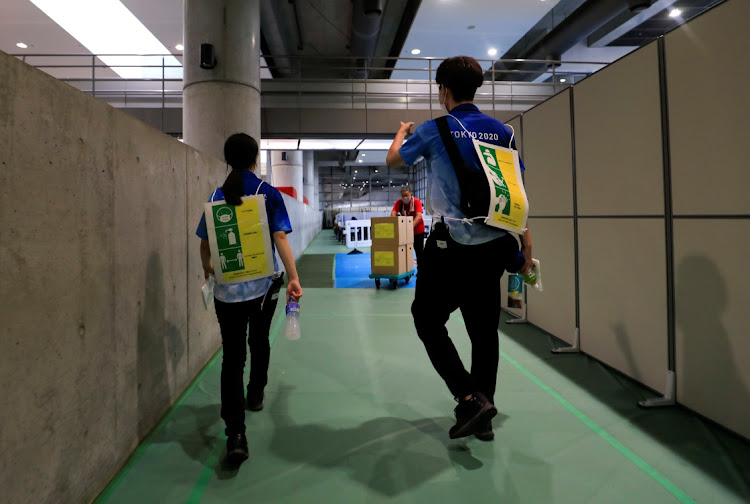 Staff members carry signs with Covid-19 safety measurements as they walk around the media area near the collection point in Miyagi Stadium, during the Tokyo 2020 Olympic Games in Sendai, the capital city of Miyagi Prefecture, Japan on July 31, 2021. REUTERS/AMR ABDALLAH DALSH

The growing focus on mental health at the Olympic Games is bringing attention to the pitfalls and benefits of social media use by athletes, for whom platforms like Instagram and TikTok help them stay connected with fans amid the isolation of the pandemic while also leaving them vulnerable to abuse.

South Korean archer An San, who won three gold medals at the games, became the target of misogynist attacks online from people who criticised her short hairstyle as being “feminist.” Japanese mixed-doubles table tennis winner Jun Mizutani said in a now-deleted Twitter post after his victory over China that he was getting anonymous death threats online, without naming the origins of the messages.

“There are definitely a lot of mean people out there who just say stuff that don’t need to be said,” said US gymnast Sunisa Lee after winning gold in the women’s individual all-around event on Thursday.

The rising interest in athletes’ mental wellbeing and the impact of social media prompted International Olympic Committee member Kirsty Coventry, herself a former swimmer for Zimbabwe, to reveal that she had quit social media in the past year.

“In the last couple of days we’ve heard of a few athletes who have gone off social media,” she told reporters on Thursday. “As nice and supportive as some can be, the negative comments — even if they are the fewest comments — can be really hurtful to athletes.”

Many athletes use social media to feel empowered by sharing their voice, expanding their sphere of influence, fostering connections and building personal brands, said Fernando Frias, a sports psychologist at Oregon State University. But the significance of the Olympics, compounded with heightened national pride, also means more people are likely to direct negativity at athletes online.

The situation facing Japanese athletes is further complicated by the polarisation in society over the decision to hold the Olympics during the pandemic. As a result, more people are taking their anger out online at athletes, said Yuji Ishizaka, a sports sociologist at Nara Women’s University.

Japanese gymnast Mai Murakami conceded that she had been affected by cyberbullying.

“I know there are people who were against holding the Olympics, and at the same time, I know there are people who are supportive,” she told reporters through tears after the all-around women’s event on Thursday. “And even though I don’t want to see those negative comments and as much as I try to ignore them, the information comes through and I pick it up before I know it. It was very hurtful and sad.”

At the same time, social media has been an important way for athletes to stay in touch with family and fans due to the travel restrictions imposed during the pandemic, and to draw attention to less popular sports or newer sports.

Rayssa Leal, the 13-year-old Brazilian skateboarder, added 4.5-million Instagram followers over two days after she won a silver medal, according to Facebook.

US rugby player Ilona Maher saw her followers on TikTok triple in number after she started videos from the Olympic Village with comical commentary on attractive athletes and cardboard beds.

“It’s also been a great tool to use for my own personal branding and getting my name out there. And hopefully also for my sport and getting rugby out there,” she said.

And quitting social media may not even be an option for some athletes, particularly those from poorer countries for whom building an online following has been instrumental to their success. For example, weightlifter Hidilyn Diaz, who won the first gold medal ever for the Philippines, got enough money to go to Tokyo after posting an Instagram story in 2019 asking for financial support.

To help ameliorate some of the negative impact from social media, athletes can turn to psychologists who travel with their teams for help. Internet companies are also recognising their role in minimising harm experienced by athletes online. Facebook, for example, launched a private Instagram support account for athletes leading up to the games, according to Joyee Biswas, its head of sports partnerships in Asia-Pacific.

Frias, the sports psychologist, even suggested that social media literacy even be built into curricula in early childhood education and in sports training.

“I encourage athletes to engage mindfully and intentionally with social media while setting clear boundaries regarding communication with followers and time spent,” he said.

Novak Djokovic beaten by Germany's Alexander Zverev at the Tokyo Games, ending his dream of a Golden Slam
Sport
11 months ago