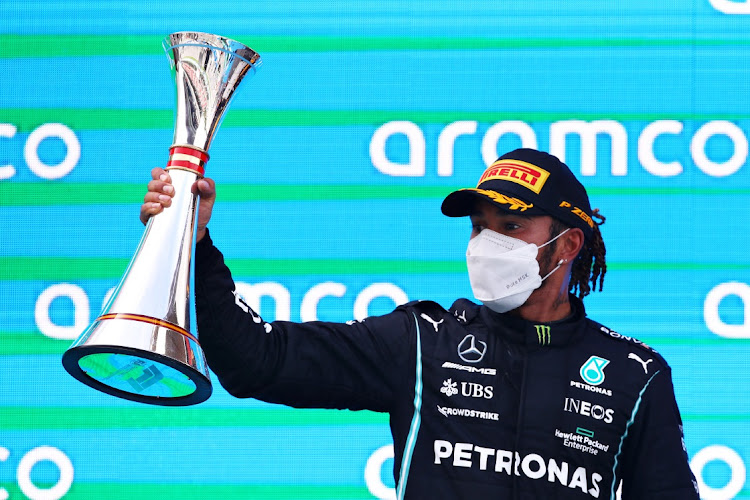 Race winner Lewis Hamilton of Great Britain and Mercedes GP celebrates with his trophy on the podium at Circuit de Barcelona-Catalunya in Barcelona, Spain, May 9 2021. Picture: MARK THOMPSON/GETTY IMAGES

London — Seven time world champion Lewis Hamilton hunted down “sitting duck” Max Verstappen to win the Spanish Grand Prix for a record-equalling fifth year in a row on Sunday and go 14 points clear at the top.

The Briton’s 98th victory, from his 100th pole, was his third in four races and he and Mercedes played the strategy to perfection after Red Bull’s Verstappen had muscled into the lead at the first corner.

The Briton pitted for fresh tyres and was set the task of closing a 22 sec gap to Verstappen in 23 laps at Barcelona’s Circuit de Catalunya. He did it in style, sweeping past to take back the lead with six laps to spare in a re-run of his epic chase of his Dutch rival at the 2019 Hungarian Grand Prix.

“I was just hunting,” said Hamilton, the first to win from pole this season and now a six-times winner at the Circuit de Catalunya. “It was a long way to come back from 20-odd seconds but it was a good gamble, a really great strategy from the team … just a remarkable job by everyone in this team. What a day.”

Verstappen, who took a crumb of comfort by then pitting for fresh tyres to limit the damage and secure a bonus point for the fastest lap, said he could see it coming.

“There was not much we could have done. They went for another stop and then I knew it was over because I was already struggling with the tyres and you could see every lap he was getting closer and closer,” he said.

“Bit of a sitting duck … we were just clearly lacking pace. I tried everything I could.”

Australian Daniel Ricciardo was sixth for McLaren and Spaniard Carlos Sainz seventh in his first home appearance for Ferrari.

About 1,000 spectators were allowed to watch from the grandstands after the previous two races in Italy and Portugal were held behind closed doors due to the Covid-19 pandemic.