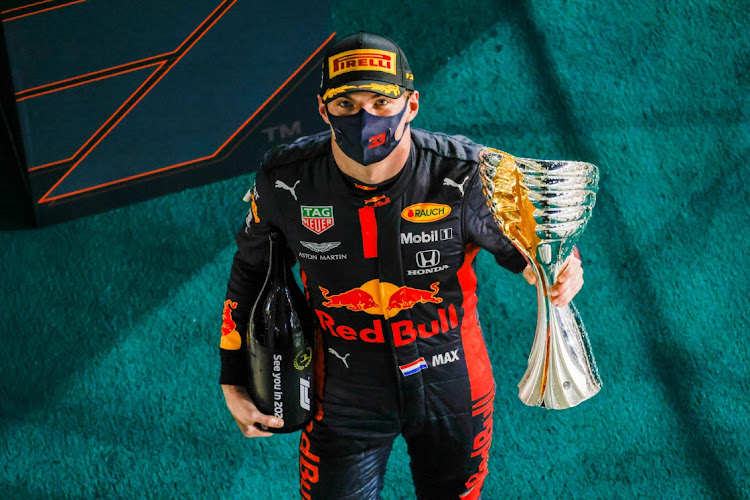 Max Verstappen of the Netherlands celebrates on the podium at the F1 Grand Prix of Abu Dhabi at Yas Marina Circuit on December 13 2020. Picture: GETTY IMAGES/PETER FOX

London — Lewis Hamilton kicks off his bid for a record eighth Formula One championship in Bahrain on Sunday, but Red Bull rival Max Verstappen can strike an early blow at the floodlit Sakhir circuit.

The 23-year-old Dutch driver was the last winner of 2020 in Abu Dhabi, when Hamilton was driving while recovering from the coronavirus, ending six years of Mercedes success at Yas Marina, and has a good chance of kicking off the new season where he left off.

“Now I have to deliver and the team has to deliver so we can try and mount a title fight,” said Verstappen. “I like the Bahrain track and it will be exciting to see our performance. It’s time to see who has got what.”

Verstappen was quickest on two of three days of testing at Bahrain’s Sakhir circuit while Mercedes looked strangely off-form. While Red Bull are adamant that Mercedes remain the favourites, Mercedes say their rivals are now ahead on performance.

“The W12 wasn’t as stable, predictable or planted as some of our rivals,” said Mercedes team boss Toto Wolff. “Red Bull looked strong on both the long and the short runs, but as always with testing, it’s difficult to be certain of true performance.

“The only thing we know for sure is that we must prove our ability to react.”

Bahrain will give some early indications of any change in the pecking order, with Mercedes winning five of the past seven races there on the regular grand prix circuit and Hamilton the last two.

Verstappen’s new Mexican teammate, Sergio Pérez, won the most recent race at Sakhir, however, on the outer layout used for the first time in December — meaning Red Bull’s latest line-up has won the last two races.

The last time Mercedes lost three races in a row was in 2019, when Ferrari were their closest rivals. Hamilton’s Finnish teammate Valtteri Bottas has won the last two season-openers, in Australia and Austria, and will be eager for a hat-trick.

This year’s Australia race has been postponed to November because of the Covid-19 pandemic.

Mercedes are one of only three teams with an unchanged line-up — the others are Williams and Alfa Romeo — and Sunday will see a string of firsts. The Schumacher name, and the screen abbreviation MSC, will be back for the first time since Ferrari great Michael’s farewell in 2012 as his 22-year-old son Mick debuts for Haas.

Russian rookie Nikita Mazepin also lines up for Haas while Japan’s Yuki Tsunoda makes his first race appearance for Red Bull-owned AlphaTauri. Four-time world champion Sebastian Vettel will be racing for Aston Martin, making a return as a constructor for the first time since 1960 as the rebranded Racing Point, after leaving Ferrari.

Australian Daniel Ricciardo has switched from Renault to McLaren in place of Spaniard Carlos Sainz, who has joined Ferrari as Charles Leclerc’s teammate.

“This season looks like it’s going to be a competitive one, but I’m looking to hit the ground running, leave nothing on the table,” said Ricciardo.

Renault have morphed into Alpine, with double world champion Fernando Alonso returning after a two-year absence from the starting grid to make his 312th start.

Bahrain will be the first step of a marathon, record, 23-race season — pandemic permitting — after 17 rounds in 2020 confined to Europe and the Middle East.