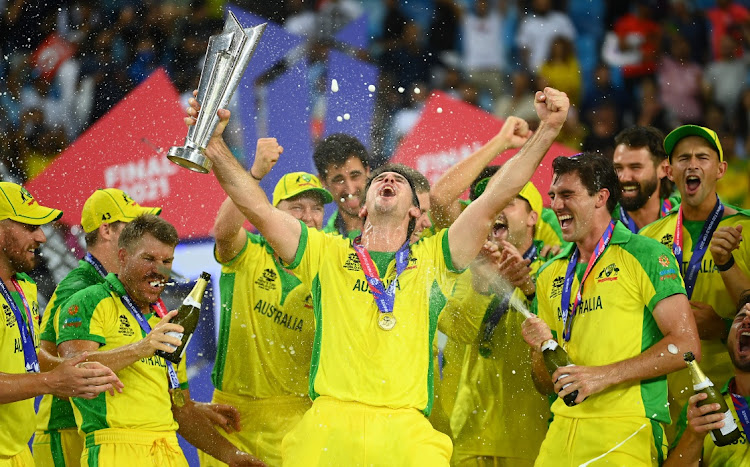 Mitchell Marsh of Australia with the ICC Men's T20 World Cup Trophy and teammates after they beat New Zealand in the final at Dubai International Stadium on November 14 2021. Picture: GETTY IMAGES/ALEX DAVIDSON

Sydney — Few players have divided opinion in Australian cricket over the past decade more than Mitchell Marsh, but the all-rounder was all smiles after playing a crucial role in delivering the country its first Twenty20 World Cup on Sunday.

Marsh’s brilliant unbeaten 77 off 50 balls drove Australia to an eight-wicket victory over New Zealand in Dubai and his celebrations after Glenn Maxwell knocked off the winning runs look set to become the indelible image of the triumph.

Now 31, Marsh has been in and out of Australia's team in all three formats since he played his first international in late 2011 and he was dropped again as recently as the third Super 12 match against England two weeks ago.

“It’s often spoken about, my journey and the ups and downs, and all those experiences just build resilience,” Marsh, who was named man of the match for the final, told reporters from the team hotel.

“That sort of stuff has got to the point where I was able to go out tonight in a World Cup final and I leant on all those experiences but that’s no different to anyone else.

“Everyone’s got their own story. Everyone’s been through ups and downs. I think what stands out for me most is just the love in this team. I’m playing for my teammates. I’m not going out there to play for my spot, or show people or prove people wrong.”

Marsh’s 185 runs at an average of 61.66 after being elevated to No 3 in the batting order played a huge role in turning Australia from tournament underdogs to champions.

Marsh’s heroics in the United Arab Emirates make it unlikely that he will miss out on the soon-to-be-announced wider Test squad for the Ashes, even though he is likely to be considered for a position further down the batting order.

Australian cricket fans will be hoping his infectious enthusiasm will similarly help the hosts to retain the famous urn which will be on the line when the five-Test series begins in Brisbane on December 8.

“Hopefully everyone back home could see the enjoyment, the smiles we played with,” Marsh said. “Any time there was a contest, we’re up and about for it, and that’s what it takes to win World Cups, so it’s been bloody great.”

Meanwhile, Australia skipper Aaron Finch was not surprised his opening partner David Warner walked away with the player-of-the-tournament award.

The opener struggled in warm-up matches too but proved his credentials as a big-occasion player with scores of 89 not out, 49 and 53 in his past three matches, including Sunday’s final.

“You didn’t expect that? I certainly did,” he told a news conference after Australia’s comprehensive eight-wicket win in the final. “Without a word of a lie, I promise you, I called [coach] Justin Langer a few months ago and said, ‘Don’t worry about Davey, he’ll be man of the tournament’.

“He’s one of the all-time great batters. And he’s a fighter. He’s someone who when his back is against the wall, that’s when you get the very, very best of David Warner. It was a special finish to the tournament for him, the last couple of knocks.”