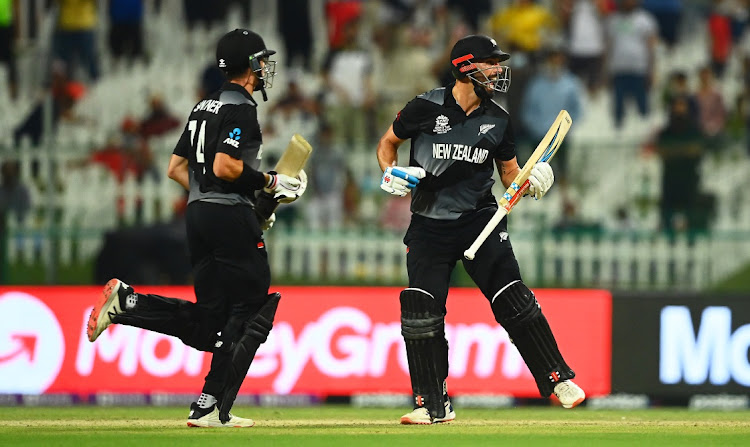 Set a tricky victory target of 167, New Zealand stumbled early in their chase before Mitchell and Devon Conway (46) put them back on track in a rematch of the 2019 one-day World Cup final.

Neesham then turned the match on its head in the 23-run 17th over, hitting Chris Jordan for two sixes and a four.

Neesham fell for an 11-ball 27 but Mitchell, who was adjudged man-of-the-match, guided New Zealand home with one over to spare.

"We've played each other on a number of occasions, we knew it would be a great game of cricket," captain Kane Williamson said after New Zealand reached their first T20 World Cup final.

"Really chuffed with the heart that was shown throughout that performance. We had wickets in hand which was really important. Neesham came out and hit the ball hard, and changed the momentum of the game."

England were crowned 50-overs world champions in 2019 via a now-scrapped boundary countback rule after a heart-stopping final against New Zealand at Lord's had ended in a tie.

The rematch two years on brought more drama and New Zealand had the last laugh this time.

Put into bat, England were 67/2 at the halfway stage of their innings and reached the 100-mark in 14 overs, kept in check by New Zealand's tight bowling and sharp fielding.

England were forced into rejigging their opening combination having lost Jason Roy to a calf injury and Jonny Bairstow moved up to partner Jos Buttler in a move that did not really pay off.

Bairstow made 18 before driving Adam Milne to mid-off where Williamson demonstrated the sharp catching which has been the hallmark of his team.

Ish Sodhi struck a body blow when he dismissed Buttler, England's leading scorer in the tournament, lbw for 29.

Conway spilled Dawid Malan (41) behind the stumps but New Zealand did not make many other errors.

Moeen (51) smashed a couple of sixes in his unbeaten 37-ball knock to take England past the 150-mark.

Mitchell and Conway rebuilt the innings but England still maintained the upper hand in the see-saw contest until Neesham's late attack.

"We are a six-hitting side and we struggled to hit them," Morgan said.

"We changed our game plan and posted around a par score. We felt right in the game at the halfway stage. Given the start we had, taking early wickets, it couldn't have gone any better." Reuters

Had team management paid better attention to run-rate, SA might still have been in the World Cup
Opinion
2 weeks ago
Next Article