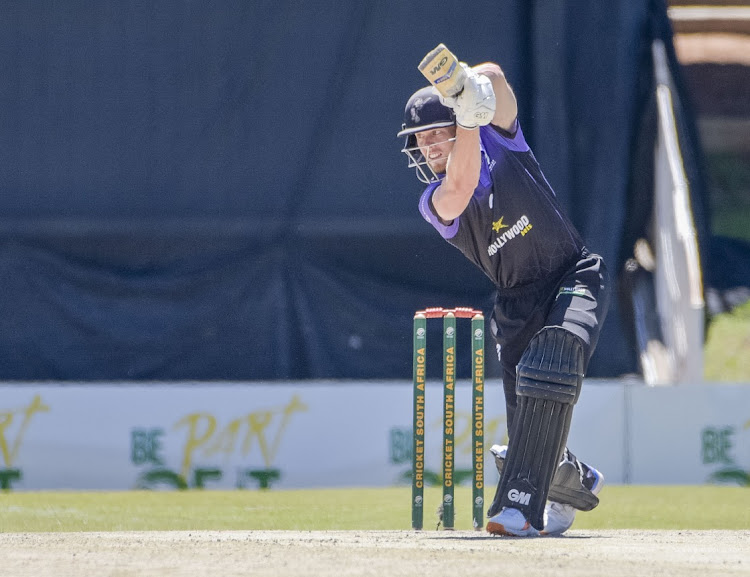 Grant Roelofsen of Dolphins during the CSA T20 Knock Out Competition match between South Africa U19 and Hollywoodbets Dolphins at Mangaung Oval in Bloemfontein, October 10 2021. Picture: KRIKKIE KAPP/GALLO IMAGES

A blistering 77 not out off 42 balls from Grant Roelofsen helped the Hollywoodbets Dolphins to an emphatic 10-wicket win over the SA Under-19 side to guarantee their spot in the Cricket SA T20 Knock Out play-offs on Sunday.

The Dolphins won the toss and bowled first in Bloemfontein and they took control of the match from the get-go.

Wickets fell regularly for the young side as the Dolphins bowlers controlled proceedings, with the wickets being shared around the bowlers.

Captain Prenelan Subrayen took two wickets and was part of a trio with debutants Thando Ntini and Odirile Modimokoane that took 6/57.

Daryn Dupavillon and Jason Smith took one wicket each as the Dolphins were set 115 to win and top the group.

In reply the Dolphins were not troubled as they coasted to victory in 13 overs with Keegan Petersen and Roelofsen taking their team over the line. Roelofsen’s 77 included nine fours and four sixes while Petersen chipped in with 37 off 36 balls.