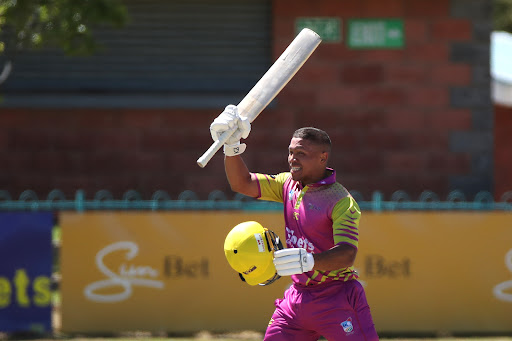 Clyde Fortuin was a member of SA’s Under-19 national team that played at the 2014 World Cup. Picture: @GAVIN BARKER/BACKPAGEPIX

A maiden T20 century by Clyde Fortuin helped the Gbets Rocks to a 17-run victory in their opening pool D match of the Cricket SA (CSA) Provincial T20 Knock Out Competition encounter against the Gbets Warriors in Kimberley.

In conditions that seemed to favour batters, it was a surprising start by the Warriors, as they made early inroads after winning the toss and electing to field first.

The Sinethemba Qeshile-led side removed three of the top order — brothers Janneman Malan (5) and Pieter Malan (14), and Sinalo Gobeni (5) — cheaply before Fortuin and Christiaan Jonker (45 off 31 balls; 4 fours, 1 six) recovered their innings well with a century stand for the fourth wicket.

Mthiwekhaya Nabe was the standout bowler for the Port Elizabeth-based outfit, picking up 3/49.

In reply, the Warriors made an explosive start to their chase, with Matthew Breetzke notching up his fifth career T20 half-century in an 88-run, second-wicket partnership with Jon Jon Smuts, reaching 96/1 after 10 overs.

The scoring rate was slowed through measured bowling from right-arm off-break Imraan Manack (0/18) and Ziyaad Abrahams (3/27), before experienced campaigner Ferisco Adams (2/27) sparked a middle-order collapse in the penultimate over.

The Warriors lost four wickets in the final two overs for 20 runs despite a destructive 30 off 16 deliveries (3 sixes) from Lesiba Ngoepe, before going on to being restricted to 166/7 at the end of their allotted overs.

In other news from the clash, a swarm of bees invaded the field during the second innings powerplay. Meanwhile, Abrahams and Adams both missed out on hat-trick opportunities as they helped the Rocks open their account in pool D.