I just wanted to spend time at the crease, says Temba Bavuma 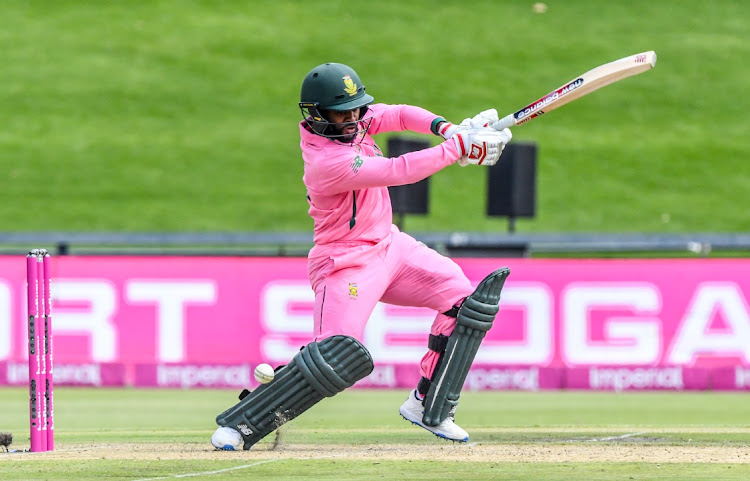 The restraint shown by the top order helped pave the way for SA as they levelled the ODI series against Pakistan at the Wanderers on Sunday.

They won the Pink Day clash by 17 runs to draw level with Pakistan‚ who won in Centurion two days earlier. While the Proteas  posted an impressive 341/6 in their 50 overs after being asked to bat‚ the innings required them to shift carefully through the gears as the conditions early on gave the bowlers something to aim at.

“When I came in‚ we were still in the power play and it was quite hard for any kind of stroke play, so I just tried to get a partnership going with Quinny [Quinton de Kock)‚” said captain Temba Bavuma‚ who top scored with 92.

Some might have felt Bavuma and De Kock (80) went about their business with too much caution‚ but they did not want to see a repeat of their top-order collapse two days earlier.

“I just wanted to spend time at the crease with the belief that it would get easier‚” said Bavuma. “I’m not sure it got much easier‚ but we did get more accustomed to the pitch.

“We are trying to be aggressive‚ but sometimes you also have to earn the opportunity to do that.”

Their counterintuitiveness helped Bavuma and De Kock negotiate that tricky patch and it later allowed the redoubtable Rassie van der Dussen (60) and the impeccable David Miller (50) to swing lustily. Van der Dussen went to the crease with an average of 83 and he looked to be on par before he was caught in the deep.

Miller remains one of the game’s most brutally calculating finishers and he did so again on Sunday‚ smashing 50 off 27 deliveries.

While the South African total was always going to prove challenging‚ their at times ragged bowling and fielding helped get the tourists closer than they perhaps should have. Fakhar Zaman’s remarkable 193‚ the highest individual ODI score at the Wanderers‚ kept the Pakistani interest going.

His innings contained 10 sixes and was the highest in an ODI chase. His savage assault on the SA attack‚ particularly on Tabraiz Shamsi‚ did not so much showcase the range of his stroke play as his ability to clear the boundary in his areas of preference.

“He played an incredible innings. I think it is the best I’ve seen or come across‚” Bavuma said of Zaman’s knock.

The South African attack and fielding will have some tidying up to do before the final ODI at Centurion on Wednesday. Conceding 15 wides to the extras total should be a sticking point in their debrief.

“As far as the fielding is concerned, we just have to make sure when those opportunities come we take them‚” said Bavuma.

SA will have to make changes as they go into the decider minus several players heading for the Indian Premier League — De Kock‚ Kagiso Rabada‚ Anrich Nortjé‚ Lungi Ngidi and Miller.

VINCE VAN DER BIJL: Much to celebrate in cricket, but not the PW-like members’ council