MIKE LOEWE: Battle of the coastline versus the waistlines of Shell shareholders looms 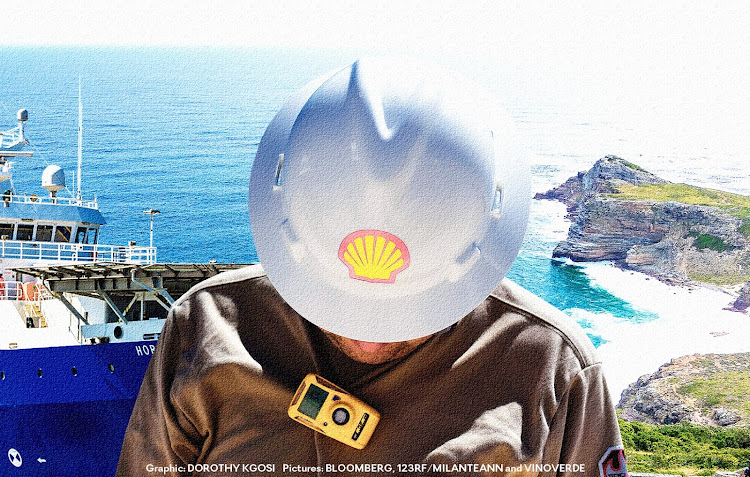 The public barrage aimed at Shell as it rides in to blast the Wild Coast oceans in its second seismic search for gas has brought up from the deep new ways of seeing economic development in the area.

There is no deviation from the heavy-handed, heavy industry approach in the mind of mineral resources & energy minister Gwede Mantashe: first the two-dimensional (2D) seismic survey in 2018, now from December 1 a full 3D blasting over 6,000m² from Morgan Bay to Port St Johns for four or five months.

There was obviously enough found in the unannounced 2018 2D survey of the Wild Coast to excite Shell and 50% partner Impact Oil to carry on blasting and possibly drilling.

With ANC-heavy Thebe Investments owning 28% of Shell Downstream (refineries and marketing), there is a clear interest for the governing party in striking oil and bringing it and its billions ashore. Port St Johns would be rebuilt as a refinery town; yet another African treasure, hub of the Wild Coast, a priceless SA asset, would be under the thumb of a multinational.

This raises the hackles of many from an environment destruction perspective, but also for those promoting a new economic model based on ecology. More than 132,000 petitioners have signed a stinging rebuke of seismic blasting on change.org and protesters along the coastline have promised to harass survey vessel Amazon Warrior from Cape Town to the Wild Coast. Yet the online firestorm has so far drawn zero response from either Shell or Mantashe, beyond Shell stating that it has obtained legal authorisation. Forestry, fisheries & environment minister Barbara Creecy shrugs and points out that her department is not involved.

The matter is inevitably headed to court. Already Sasol and Italian oil company Eni are locked in battle over seismic blasting and drilling on the KwaZulu-Natal coast that started in 2016. The body of scientific evidence linking mammal strandings to noise pollution in the ocean is building. At the forefront of the disquiet is seismic blasting — streams of up to 48 air guns housed in arrays being dragged below the ocean surface by the survey vessel, firing blasts in unison every 10 seconds for four or five months.

Save The Whales, once a Western-orientated international effort, has now become a war cry in the Eastern Cape and KwaZulu-Natal — public support for marine protected areas has grown since the so-called Transkei exploration right was cleared by the government in 2014. There is now something catastrophic about the traditional gas exploration modus and model. World views old and new are colliding.

Against the background of the COP26 and Paris agreements the Mantashe-Shell-Thebe alliance is blundering into an area of incredible ecological beauty — and extreme ocean treachery. The survey site is known both for its “greatest shoal on earth” marine orchestra when the famed sardine run takes place and the treacherous Agulhas current, which can run at up to 8.5km/hour. That is 70-million m³ per second, twice the speed of the Gulf Stream.

The 150m cargo liner steamship SS Waratah, which vanished without a trace in 1909, heads a list of 50 ships that have been heavily damaged by the colossal freak waves that rear up when the warm current and arctic storm swells collide. The potential for oil spillage on a pristine coastline is considerable.

The public vacuum created by the muted response from both the government and Shell has been filled with volumes of new information about the Wild Coast ocean ecological system as an auditory wonderworld, and how behaviourally devastating piercing seismic blasts could be to coral and the 38 species of cetaceans — whales and dolphins — as well as turtles and reef fish.

For many South Africans, from Xhosa-speaking subsistence farmers to cottage owners, holidaymakers and adventurers, there are deep bonds with the Wild Coast wilderness. Richard Warren-Smith, owner of the family hotel at Morgan Bay, estimates that 600 out of 3,000 adults in the village get work from tourism and holidaymakers.

Mining already has a bad reputation in the Eastern Cape, especially in Pondoland, where the Amadiba Crisis Committee recently won a battle against Australian miners and Mantashe, news of which reverberated around the world. The forces now gathered against Shell, Impact, Thebe and Mantashe are reminiscent of the old United Democratic Front, with protests taking place all along the coast from Cape Town to Durban.

There can surely be no more marked a vessel than the Amazon Warrior as it makes its way to these waters. WhatsApp groups have come alive with action, meetings are being held, lawyers briefed, letters sent to ministers and court papers drawn up.

This will be a battle of the coastline versus the waistline of Shell shareholders and Mantashe. This is no tiny, isolated band of warrior subsistence farmers grouped around the red sands of Xolobeni; this is a national and international upwelling that has placed the SA government in a most awkward position.

A 454-page PhD thesis handed in to Rhodes University by Div de Villiers this month included interviews with 100 Wild Coast traditional leaders and 100 foresters and game rangers, revealing a deep understanding of how the Wild Coast’s land-ocean ecology intersects and needs to be conserved and protected, as it has been for hundreds of years.

De Villiers, head of the Green Scorpions and director of environmental law enforcement in the Eastern Cape department of economic development, environmental affairs & tourism, has produced a brilliant baseline body of research that shows the way forward to an ecological economy where traditional Nguni cattle herds, food and market gardening and farming, and coastal tourism and food collection, can exist and thrive.

But while Mantashe continues to defy President Cyril Ramaphosa’s demand for renewable, less harmful energy for SA, the Wild Coast has come to represent the clash between the past approach of plunder and an organic future where people look to the government to promote an authentic green economy.

This is a natural fit for millions of people in the former Transkei, those who have found tranquillity in ancestral rural homesteads and on the coast. People know that when mining and heavy industry arrives, these tenets of ancient culture come under attack.

Aggressive exploration for oil and gas feels like a wrong move at the wrong time, coming as it does amid a community life-and-death battle against cattle-thieving syndicates, salary-gobbling government officials and urban-spawned rural political thuggery.

A coastal victory against Mantashe and the miners could be viewed as a tipping point for the Wild Coast. And it would be no crisis for Ramaphosa, as all the plans to build the coastal and green economy are in place.

• Loewe is a climate & environment writer.

There’s a renewed focus on efforts to limit global warming and ensure a ‘just transition’ away from dirty fossil fuels. It may look like a ...
Features
6 months ago

Most oil production in the Gulf of Mexico shut down, flights cancelled and 105,000 homes and businesses lose power
World
8 months ago
Next Article