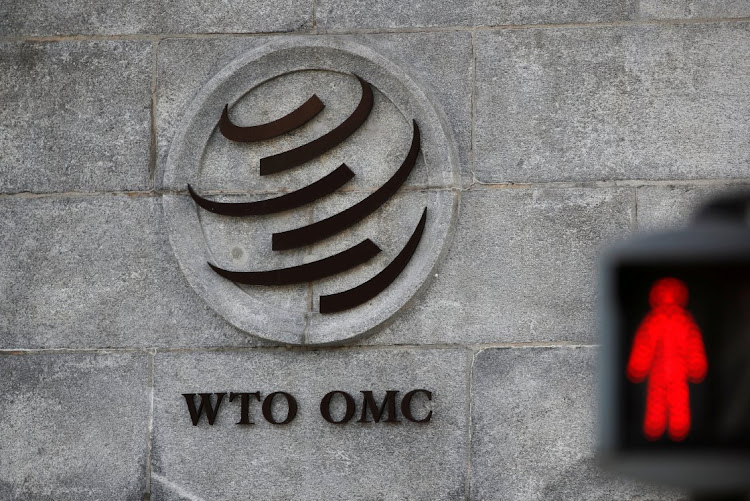 The World Trade Organization logo is seen outside its headquarters in Geneva, Switzerland. Picture: REUTERS/DENIS BALIBOUSE

The world’s trading system is back on the agenda. Trade ministers from around the world met last week to set out priorities for the 12th trade ministers’ conference (MC12) that will take place in December. The July preparatory meeting is critical because trade ministers are anxious to deliver outcomes that are more tangible after the disappointing conference held in Argentina in December 2017.

The Geneva ministerial meeting will be the first to be held since Ngozi Okonjo-Iweala became the first African and woman to lead the World Trade Organisation (WTO). Her priorities include tackling the Covid-19 pandemic, concluding the fisheries subsidies negotiations, reforming the dispute settlement system, and resolving outstanding issues on agriculture. She has also expressed a desire to improve dialogue and review the work on e-commerce, investment facilitation, services domestic regulation, small and medium-sized enterprises, women in trade, as well as trade and climate.

Among the many challenges she faces are expectations that she will articulate a unifying vision on the major issues that have previously proved to be divisive. Compounding the challenge for her will be the lack of transparency associated with small group meetings, which often leads to the exclusion of other countries from the discussions that are binding on all WTO members. In the past, failure to achieve balanced and equitable negotiating outcomes has been cited as evidence of the inherent deficiencies of the multilateral trade system.

Significantly, the MC12 will take place in an unusual trade context stemming from the devastation of the Covid-19 global pandemic, which has eroded socioeconomic development gains and undermined progress on poverty reduction indicators. It will also be held at a time when the WTO is faced with a real crisis of confidence: a key pillar of the WTO, the dispute settlement system that has provided certainty and robustness in the multilateral trading regime, has been under severe threat.

In the agriculture talks, the key priority is the elimination of domestic subsidies provided to farmers in developed countries. Provision of domestic subsidies by developed countries distort trade by restricting access to global markets for agricultural products from developing countries. Additionally, these subsidies generate large surpluses that are eventually dumped in developing country markets at reduced prices. There is also pressure on the WTO to resolve issues related to the continuation of subsidies for food security, exemption of World Food Programme purchases from export restrictions, and improved notices by the patrons of export restrictions.

In the fisheries negotiations, the main issue is the prohibition of certain forms of fisheries subsidies that contribute to overcapacity and overfishing. Moreover, there is a need to eliminate subsidies that contribute to illegal, unreported and unregulated fishing, and to discourage new subsidies to the fisheries sector. There are sharply differing positions among the WTO members on these thorny issues. For example, some countries have demanded comprehensive cuts in subsidies paid by governments to distant-water fishing fleets, while others have sought preferential treatment for small-scale and artisanal fishing in any trade deal that is eventually concluded.

A framework on trade and health, designed to facilitate universal access to Covid-19 vaccines, has been introduced. This is aimed at equipping countries to handle future health crises better. To combat the Covid-19 pandemic, developing countries have proposed a waiver by developed countries of specific rights and obligations afforded by the Trade Related Aspects of Intellectual Property Rights (Trips) agreement. If implemented, the waiver will allow developing countries to manufacture vaccines and thus reduce their dependency on suppliers from developed countries. Although the US has, in principle supported a Trips waiver, the EU has tabled a counter proposal containing provisions that are different from the proposal tabled by developing countries.

Significant progress has been made on a number of WTO member-led initiatives, known as joint initiatives. These are negotiations on a limited number of issues of interest to certain WTO members, including domestic regulation for trade in services, small and medium enterprises, investment facilitation as well as e-commerce. It remains to be seen, however, how the outcomes of the joint initiatives will be incorporated into the WTO legal framework in accordance with the provisions of the WTO’s founding agreement.

The MC12 is also expected to address the long-standing issue of special and differential treatment for developing countries within the WTO, which is crucial to redressing the imbalances skewed in favour of developed countries in WTO agreements. Delivering concrete results on all these issues is critical for the WTO’s credibility and relevance.

There are niggling questions that WTO members need to answer. Are the envisaged results in the trade talks sufficient to restore confidence to the WTO? Has sufficient progress been made to produce meaningful outcomes at MC12? More importantly, will these outcomes convince sceptics that the WTO is still relevant and responsive in these challenging times?

The MC12 cannot be a business-as-usual ministerial meeting.  The decisions it takes will have long-term implications for the future of the multilateral trading system. The stakes are high and the MC12 cannot afford to flounder.

• The authors are international trade experts who have worked in various areas of trade policy, trade negotiations and economic development in the last 20 years. They write in their personal capacities.

EU’s levy would apply to steel, cement, aluminium, fertiliser and electricity, which could become a source of global tension
World
2 weeks ago