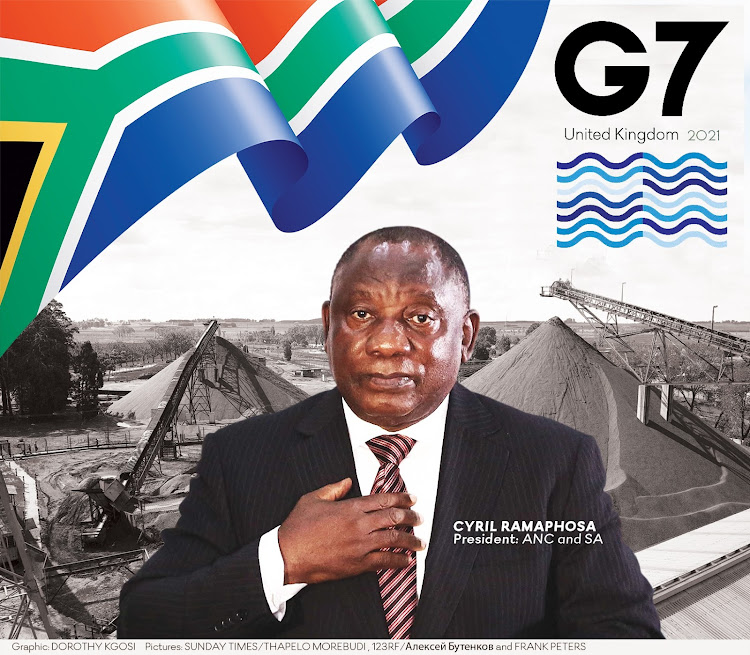 SA, together with India, South Korea and Australia, will be a guest at the G7 Leaders’ Summit this week. It serves as an occasion for SA to establish a more assertive climate diplomacy at the centre of its international relations strategy. Climate diplomacy is a tool for transforming SA’s energy economy, advancing its economic interests and energy security, while also championing the continent’s developmental priorities.

The G7 summit in Cornwall takes place amid an unprecedented global pandemic, compounded by the climate emergency and rising geopolitical rivalries. Unsurprisingly, the UK has made the global response to Covid-19 and climate change the main priorities of its G7 presidency. Both issues are highly political.

Climate change in particular, and the global architecture and instruments developed to tackle it, are already having a significant impact on future economic trajectories, largely framed along the interests of advanced economies. Countries that do not develop the requisite foreign and trade relations capacity to claim a stake in the investment surge in decarbonised technology innovation and infrastructure risk being left behind.

Recent G7 communiqués point to the increasing use of a range of levers to accelerate the global transition away from fossil fuels and direct resources towards decarbonisation. These include a more ambitious role for global financial markets in achieving a transition to net-zero, with improved climate-related financial disclosures; phasing out government funding for fossil fuel projects, such as coal and gas power projects; and calls by trade ministers for trade policy that supports sustainable supply chains for forest and agricultural commodities.

Achieving decarbonisation is the new “space race”, with the rich Western world and China each seeking technological strategic autonomy in this field, recognising that it will have consequences for their overall power and positioning.

There is already a push to “reshore” critical industrial green technology, secure the supply of critical minerals, reduce energy interdependence and position states with the capability to benefit from the surge in renewable energy and other green tech innovation. While decarbonisation delivers a global climate good, it is also being used to secure competitive technology first-mover advantage and other geoeconomic interests.

The resources being put into net-zero targets by advanced economies can have significant negative effects on emerging and developing economies, already ravaged by shrinking fiscal space, rising debt and overburdened social infrastructure as a result of the pandemic. New rules such as border carbon tax adjustments, being considered by the EU, stand to harm carbon-intensive exports from developing countries.

The G7 leaders this week should recognise that a global decarbonisation drive that does not consider the systemic biases in the current global climate finance architecture will deepen the social and developmental divides between rich and poor, not level them. Thus, financing mechanisms must be cognisant of the disruptions that energy transitions cause and how to mitigate them. The climate finance architecture is fragmented and insufficiently transparent to ensure accountability. While the $100bn commitment by developed countries for assistance to tackle climate change in developing countries is clearly minuscule in the face of the real cost of transforming energy systems in a fair and just way, the efficacy of the spend is as important as the quantum. The G7 must revisit the conventional criteria and rules, including the characteristics of concessional finance, recognising climate finance is an investment in energy transitions, not a charity.

The G7 should push to reduce climate fragmentation and adopt approaches that do not place onerous risks on developing countries that need to access such finance. Achieving an energy transition also necessitates reforms to the broader global financial architecture, trade policies and rules governing technology and intellectual property rights.

Lastly, the G7 leaders this year highlighted the desire to boost the partnership between them and Africa. The way to do so is to act on these issues in their bilateral engagements and in the global governance institutions where they hold significant sway.

So, what should SA argue for at the summit and beyond?

First, SA needs to emphasise the centrality of the Paris Agreement to reinforce the importance of multilateralism. At the same time, SA should recognise that climate diplomacy’s range needs to be expanded, in an integrated fashion with other interests, to other forums where key decisions on the future of decarbonisation are being made outside the Paris Agreement process. Plurilateral or regional agreements may create faits accomplis by imposing rules and financing measures without the input of developing economies — the plurilateral process being negotiated under the WTO for the environmental goods agreement is a case in point.

Second, greater ambition in SA’s domestic climate action targets, beyond what we can afford with domestic resources, must be reciprocated by a comprehensive economic package that removes some of the binding constraints relating to access and cost of finance.

Third, the G7 summit must be a first step to developing an integrated whole-of-government approach to climate diplomacy to advance SA’s economic and social imperatives in achieving a just energy transition. This can be taken forward to the G20 deliberations later this year and the German presidency of the G7 next year.

Fourth, SA’s chairing of the African Ministerial Conference on the Environment this year provides it with the platform to advocate for Africa’s concerns in this realm and on the road to COP 27, which will be held in Africa next year.

More broadly SA can champion an alliance of coal-dependant economies around a transition dialogue and mechanism as part of a global collective strategy to retire coal within developing economies. It should also emphasise that “stranded assets” that will have significant cost for many developing economies may necessitate a special accelerated coal retirement fund.

The establishment of the Presidential Climate Change Coordinating Commission — a development for domestic co-ordination of climate policy and ambition — needs a bold and enlivened climate foreign diplomacy to unlock new sources of finance and investment as SA seeks to build an inclusive and just economy for all.

• Fakir is director of the African Climate Foundation, and  Sidiropoulos CEO of the SA Institute of International Affairs.