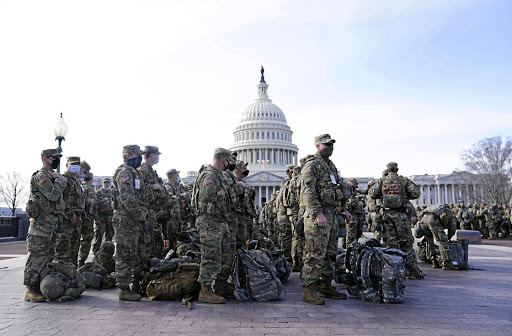 National Guard troops outside the US Capitol on January 16. Picture: GETTY IMAGES/ERIC THAYER

According to a recent poll, 68% of American voters overall believe the US provides its citizens with more freedom than just about any other major nation. Break it down by age, however, and it’s clear that older people believe this much more than the youngest voters.

It’s a question that can generate a lot of emotion and, perhaps, too little serious discussion. But the truth is the young people are onto something. By some key measures freedom has been slipping in the US in recent years. As many generations of Americans have learned, freedom isn’t a static condition. It must be preserved, protected and constantly promoted anew.

Fortunately, the poll also found that 83% believe it is very important to protect the freedoms and rights of individual Americans. Two credible, yearly studies lend perspective to this issue. One is the annual Index of Economic Freedom, published by the Heritage Foundation. The index is important because the advance of economic freedom, in all its varieties, has been a catalyst to the dramatic increase in overall freedom worldwide over the last three centuries or more. Years ago the US was firmly entrenched in the world’s top 10. By the 2020 index it had dropped to 17th.

Why is the US slipping? The report says this is “primarily because of excessive government spending and intrusive regulation of the health care and financial sectors”. It continues, “Reckless deficit spending by Congress and the administration under both parties explains the weakest index indicators: government spending and fiscal health.” We have long warned about the long-term problems of deficit spending. Over time, interest on the national debt robs the economy of buying power, which is reflected in wages and the prices of goods. Low interest rates have tempered those effects for the time being, but the problem looms.

The other index is the Human Freedom Index, published by the Cato Institute, a free-market think-tank. Here, the US also ranks 17th. Major lags on freedom were associated with increases in tariffs, which inhibit business owners from freely conducting commerce and which act as taxes on American consumers. The nation also scored lowest in judicial protections and the size of the federal government, and there are signs that religious freedom is in trouble, particularly where it concerns harassment and physical hostilities. /Salt Lake City, February 5