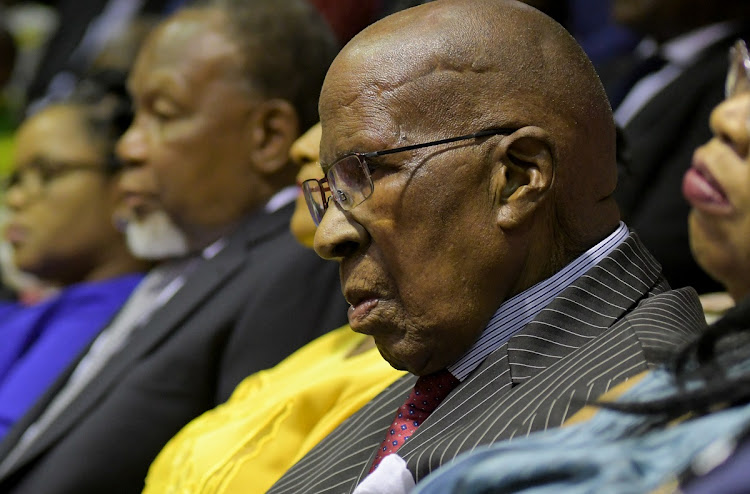 Rivonia trialist Andrew Mlangeni has died after being hospitalised on Tuesday. This is an edited version of the speech President Cyril Ramaphosa gave at Mlangeni’s 95th birthday celebrations earlier this year.

Our hero and father Andrew Mlangeni was born on June 6 1925, 95 years ago. His birthday was a celebration, but also a triumph, for it is only the few who get to reach such a milestone. We remain immensely grateful for Bab’ Mlangeni’s incalculable contribution to this country and its people.

It is said that virtue is its only reward. Today we pay tribute to a man whose life has been rich, but not in the material sense; rewarding, but not with title or position; and fulfilling, but never blighted by arrogance or conceit.

The 95th birthday celebration was tinged with sadness, because there should have been a seat reserved for Bab’ Mlangeni’s dear friend and comrade, Denis Goldberg. Though we all felt sorrow at Bab’ Denis’s passing, we know it has been all the more difficult for Bab’ Mlangeni. We had become used to seeing them together at national days, rallies and other public events.

We have all marvelled at Bab’ Mlangeni’s boundless energy and enthusiasm, at his firm grasp of the issues affecting our people, and at the sheer depth of his commitment to this country. He has been our conscience, encouraging and supporting us where we did well, and steering us back on course when we faltered. In doing so he was consistent and principled.

His life was one of struggle and sacrifice. We know of the young man who was forced to leave school at an early age to care for his family, about a bus driver who joined the workers’ struggle and then the ANC Youth League in 1951. We know of the activist who was present at the Congress of the People in Kliptown in 1955; of the cadre who was sent to China for military training in 1961; and of the Rivonia Trialist and political prisoner who spent 26 years on Robben Island.

It was of great concern to him, a concern we share, that 26 years into democracy we have still not fully met the developmental aspirations of our people

Then there is the little known fact that Bab’ Mlangeni once moonlighted as a man of the cloth. In the early 1960s, when he was wanted by the police, Bab’ Mlangeni was Rev Mokete Mokena of Dube, Soweto, complete with a certificate of priesthood, a collar and a matching costume called a porapora. Using this priestly disguise he was able to travel across provinces to organise meetings and address MK (Umkhonto we Sizwe) structures. I’m told it went well, except for the time he started eating at someone’s home without blessing the food, or the time he lit up a cigarette, much to everyone’s shock.

Then there are the forces that shaped him. Bab’ Mlangeni was born into a world of segregation and dispossession, where the insidious effects of the 1913 Natives Land Act deprived his family of their ancestral land, forcing them to live on three separate farms as labour tenants. We know of the struggles that defined his early life. To obtain an education, to find employment in the city to support his siblings, and of his grief at the loss of a father when he was still young.

There are many experiences in Bab’ Mlangeni’s life that left a deep impression on me, as told to me in our many conversations over the years or relayed in his biography, The Backroom Boy. I reflect on them often, for they are a reminder of just how high a price was paid for the freedom we enjoy today. Yet none has found greater resonance for me at this particular time than the year 1946, when he finished his schooling and had to look for work, but found himself unable to do so because he did not have a dompas.

For that entire year, he recalled, he lived in fear of deportation from the Transvaal back to his rural home. Or worse yet, of being detained and forced to work on the potato farms at Bethal. By compelling us to carry a pass, our oppressors wanted to remind us that we were unwanted and that we were strangers in the land of our birth. In tearing them up, in burning them, in refusing to carry them no matter the cost, we were reclaiming far more than our right to walk the streets in freedom. We were reclaiming our very dignity.

I know it pained Bab’ Mlangeni deeply to witness acts that infringe on the dignity of others. I know that seeing our children in mud schools, seeing men and women collecting water from dirty rivers, and seeing pensioners sleeping outside pension pay-points, aggrieved him greatly. And he has not hesitated to speak out when necessary. It was of great concern to him, a concern we share, that 26 years into democracy we have still not fully met the developmental aspirations of our people, and that this is an affront to human dignity.

Bab’ Mlangeni sounded the warning many times. He constantly reminded us that our impressive constitution means little unless the rights it guarantees are fulfilled. He spoke at length of our responsibility as leaders of this country to meet the expectations of our people. Unless we make this a world that is truly free of the dompas of the heart and the mind, we will never be a united nation.

Bab’ Mlangeni is the great link between our past and our future. From his life we gain insight into the importance of loyalty to a cause, the virtue of selflessness, and of unwavering commitment to the upliftment of others. We also draw lessons on the qualities of leadership, such as bravery, honesty, empathy, humility and being principled. His life was an inspiration, to me and to many others.

Bab’ Mlangeni was a national treasure, and we are thankful for his presence in our public life and in the life of the ANC as a mentor, a guide and, importantly, a critic. In the words of Martin Luther King Jr: “Everyone has the power for greatness, not for fame, but greatness, because greatness is determined by service.”

Bab’ Mlangeni served his country and his people. May we continue to benefit from his wisdom and counsel, and may we prove ourselves worthy of his support and confidence.

Because the majority of black South Africans remain voiceless and vulnerable, they’re abused by power-mad cretins emboldened by a gun and a uniform
Opinion
10 months ago

A true activist, Denis Goldberg epitomised what it means to be a servant of the ...

A true activist, Denis Goldberg epitomised what it means to be a servant of the ...