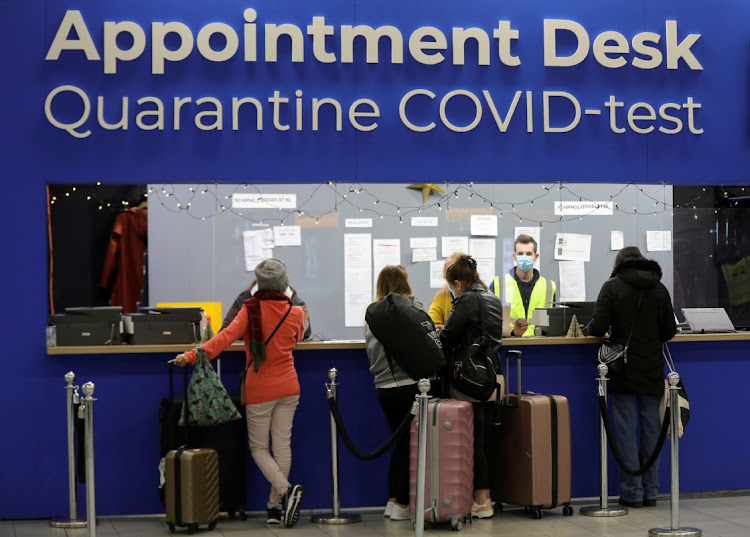 More than half of those who had been held at the hotel are now free to continue their travels. File photo of Covid desk at a Dutch airport. Picture: REUTERS/EVA PLEVIER

Dutch health authorities said that more than 20 passengers who have been in quarantine since testing positive for Covid-19 after flying from SA on November 26 will be allowed to leave on Thursday.

A spokesperson for the health authority for Kennemerland, in which Schiphol airport is situated, said authorities won’t disclose whether any of the 14 passengers found to be infected with the Omicron variant of the virus are being released, citing their right to privacy.

They also won’t disclose or discuss the seriousness of those patients’ symptoms, the spokesperson added, also citing their right to privacy.

The Dutch Public Health Service, or GGD, tested more than 600 passengers who arrived on two flights that had departed from Johannesburg and Cape Town on Friday, before the Dutch government changed its rules on air traffic from Southern Africa because of concerns about the Omicron variant.

Of 62 passengers who tested positive for Covid-19, 44 were held in isolation in a hotel near Schiphol airport, while some Dutch citizens have been in quarantine at home.

Results of follow-up tests on Monday mean that more than half of those who had been held at the hotel are now free to continue their travels, a GGD statement said.

“People who tested positive will remain in isolation. Their situation varies ... some have symptoms, others don’t or barely,” GGD Kennemerland director Bert van Velden said in a statement.

The discovery of Omicron, labelled a “variant of concern” by the World Health Organisation, has sparked worries globally the world that it could resist vaccinations and prolong the Covid-19 pandemic.

Dutch health authorities are also trying to contact and test about 5,000 other passengers who have travelled from countries in Southern Africa since November 20. Those tests have so far discovered two additional Omicron cases.

‘We have found the Omicron coronavirus variant in two test samples that were taken on November 19 and 23,’ the Dutch public health institute said
World
6 months ago