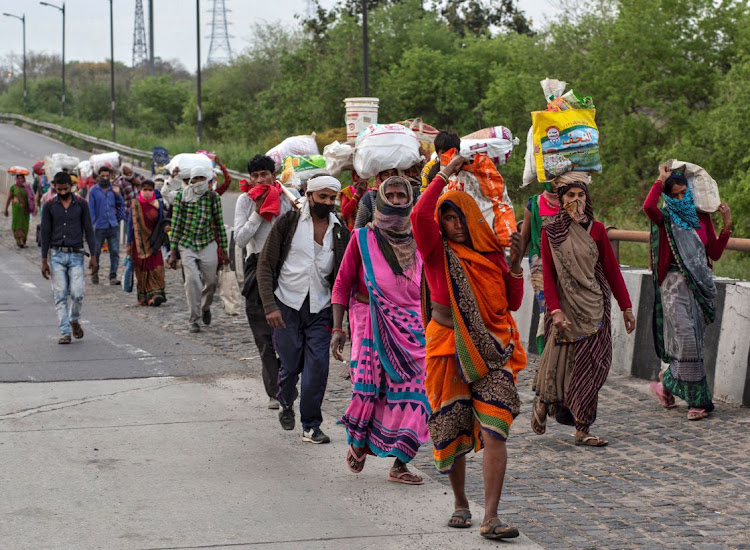 Migrant workers return to their villages during a 21-day nationwide lockdown in New Delhi, India, in this March 26 2020 file photo. Picture: REUTERS/DANISH SIDDIQUI

Kuala Lumpur — Global labour shortages and poor treatment of migrant workers exacerbated by the Covid-19 pandemic should be a wake up call for governments to treat their foreign workforce fairly instead of viewing them as “occupiers”, activists said on Thursday.

In a panel at the Reuters Next conference, Asian labour activists said the coronavirus pandemic had displayed how many economies could not function effectively without workers imported from countries such as Philippines and the Mekong region.

Yet at the same time, these workers numbering in the millions are discriminated against in their host countries — forced to live in cramped dormitories, separated from the general population, lacking social protection and access to Covid-19 information.

“The pandemic highlighted a lot of structural issues that have already existed for a long time,” said Reiko Harima, regional co-ordinator of Mekong Migration Network.

In Singapore, it took border closures to trigger a severe labour crunch that changed the power imbalance between employers and migrant employees, said Alex Au, vice-president of Transient Workers Count Too (TWC2).

“Once that phenomenon appeared … the problem [with recruitment fees] was solved by itself and there was upward pressure on salaries,” Au said, referring to fees many migrant workers have to pay agents to get a job, which can leave them deep in debt.

Migrants workers have long been treated as an invisible workforce and are perceived by host countries as untrustworthy and a drain on the economy even though they are filling jobs unwanted by locals, the panellists said.

“There is no justification to treat migrant workers any less than the locals,” said Ellene A Sana, executive director of Centre for Migrant Advocacy.

“We should treat them all with a sense of dignity and afford them the rights that they do deserve.”

Kingdom's social mores are changing under reforms led by Crown Prince Mohammed bin Salman, but men still have a tight grip on all the levers of power
World
2 months ago