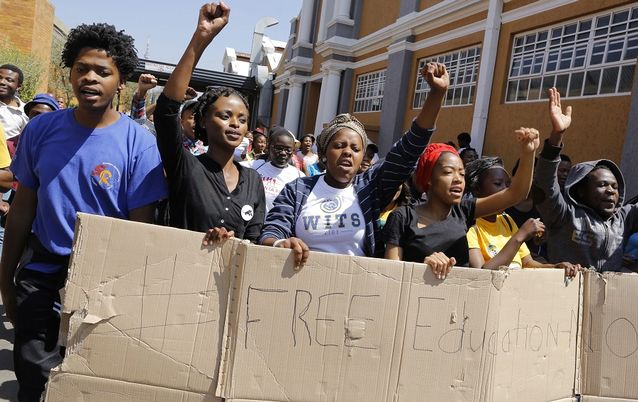 Vandalism during student protests has cost universities and colleges about R1bn over the past five years, parliament heard on Tuesday.

Protests have rocked universities in recent years as students complain about exclusion due to lack of funding.

Most recently, students took to the streets in March protesting against university funding issues after finance minister Tito Mboweni unveiled a budget in February with below-inflation increases for student financial support as the government battles to contain a debt load that’s set to breach 100% of GDP in the next few years.

“Over the past five years [in terms of] the amounts of money lost due to destruction of, especially, university property, my sense is that possibly we have reached almost R1bn. That is a huge amount of money that could have gone to make a huge impact on the [higher education] system,” higher education, science, and innovation minister Blade Nzimande said during a briefing to MPs.

Nzimande was leading a delegation from his department to brief MPs on the strategic plan for up to 2025 and the budget for it.

He said the destruction of property during protests is a major concern for the department.

“Unfortunately, the destruction of property has not stopped [during] protests and this is a matter the department needs to focus on, but also the portfolio committee [on higher education, science, and innovation] needs to [address it].

The department has also bemoaned budget cuts that forced it to reprioritise funding to support the National Student Financial Aid Scheme (NSFAS), the funding agency for higher education.

The NSFAS, which could only make R28.5bn available for the 2021 academic year, faced a shortfall of R5.6bn for university students and R719m for Technical and Vocational Education and Training (TVET) colleges before the cabinet approved a reprioritisation.

Nzimande has previously told parliament that the R3.3bn of the R6.3bn in additional money going to the NSFAS would be taken from the National Skills Fund, an agency set up mainly to support and upskill unemployed youth.

The cuts will halt projects aimed at developing much-needed artisans, necessary for SA’s long-term development goals. The NSF was set up in 2001 and is funded through an allocation of about 18% of the skills development levy, which is paid by every employer in line with the size of their salary bill. Its annual revenue is about R4bn.

Other projects that will bear the brunt of reprioritising towards students include a R2.5bn grant to universities and R500m meant to build new accommodation for TVET colleges.

We will never be able to measure fully what has been lost in the University of Cape Town fire, writes Chris Thurman
Opinion
1 week ago