Daniel Mantsha’s withdrawal from the case, based on her actions as SAA chair, comes after her previous lawyers ENS dropped her in June this year 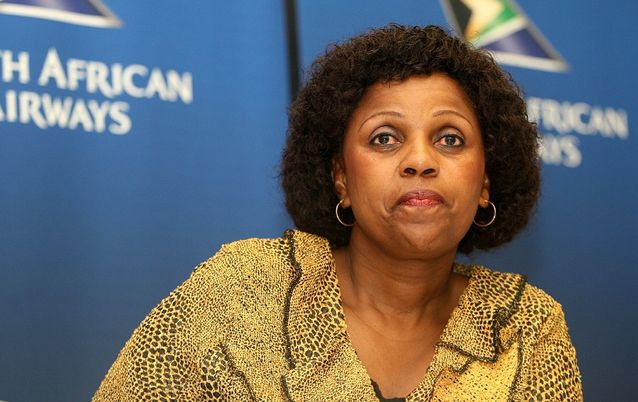 Former SA Airways (SAA) chair Dudu Myeni has been dropped by her lawyer once again, this time ahead of a delinquent director case against her.

Daniel Mantsha, who is former president Jacob Zuma’s lawyer, sent a notice, dated September 20, of his withdrawal to Organisation Undoing Tax Abuse (Outa) and the SAA Pilots’ Association’s (Saapa’s) lawyers, saying he withdrew “since we have no financial instructions”, Outa said on Monday.

In March 2017, Outa and Saapa filed an application to declare Myeni a delinquent director, arising from her actions as SAA chair from December 2012 to October 2017.

If she is declared a delinquent director she will be blocked from holding any position as a director in the future.

Myeni, an ally of Zuma, was appointed to the SAA board in 2009 and lead it from December 2012 until October 2017 when she was replaced.

She is seen to be one of the people who was instrumental in the demise of SAA.

Myeni is also the chair of the Jacob Zuma Foundation and has been implicated in the state capture commission of inquiry.

Mantsha’s withdrawal as her lawyer comes after her previous lawyers ENS dropped her as a client in June this year.

Earlier in September Mantsha, after acting for Myeni in the matter for less than a month, tried to postpone court proceedings on the grounds that he was not ready.

The high court in Pretoria is set to hear the matter on October 7.

Outa said on Monday it was ready to go to court, and would oppose any attempt to use the change of lawyers to delay the matter.

“It would appear, however, that there is a ‘Stalingrad tactic’ playing out with the rotation of attorneys representing Ms Myeni and we trust the court will ensure that this case is not delayed as a result of her unpreparedness,” Outa’s head of legal affairs Stefanie Fick said.

“It is our view that this country has suffered immensely through poor governance and dubious conduct within our state-owned entities by a number of people like Ms Myeni. In this case we have set out to ensure that executives and directors who were appointed to safeguard these entities are held accountable when they act contrary to the Companies Act.”

The lobby group said Myeni had been aware of the case for more than two years and the court date was set by the court in February 2018.

SAA pilots threaten to down tools to save broke airline

Their goal is ‘to put an end to the continual pressure on the fiscus in the form of bailouts and guarantees and, ultimately, to help put the airline ...
National
2 years ago

Mpshe told the state capture inquiry how she was instructed, either by Myeni or Yakhe Kwinana, to appoint senior people without following normal ...
National
3 years ago

Inquiry hears that ‘Myeni’s person’ ran the show at SAA