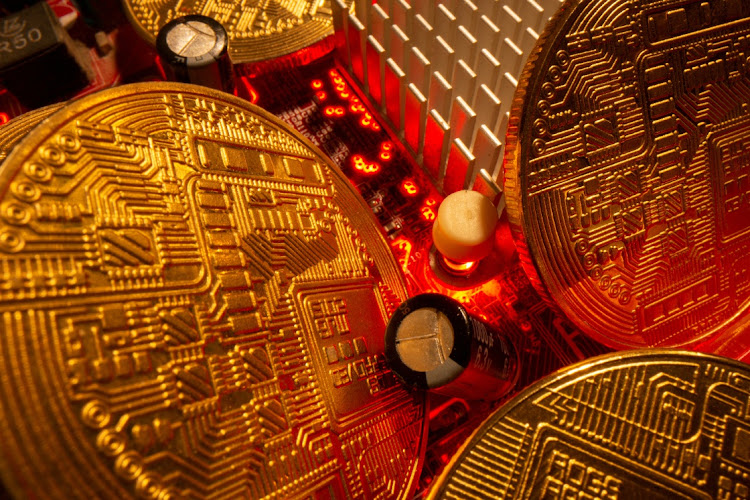 Representations of virtual currency stand on a motherboard in this picture illustration taken May 20 2021. Picture: REUTERS/DADO RUVIC

New York — The cryptocurrency market nursed its wounds on Friday after a week of pain triggered by a Chinese regulatory warning shot, forced selling and a possible US tax clampdown.

If that was not enough, bitcoin believers are still fuming after onetime proponent Elon Musk did an about-face and criticised the token for its energy usage. Bitcoin fluctuated around $40,000 in Asian trade, down about 9% on the week though up from a Wednesday plunge towards $30,000. Other coins have slumped too, such as ether’s 17% weekly nosedive.

The sour stretch for digital tokens started with Tesla’s billionaire founder Musk suspending acceptance of bitcoin payments and trading barbs with boosters of the cryptocurrency on Twitter. China’s central bank added to the downdraft on Tuesday after carrying a statement warning against using virtual currencies. On Thursday, it emerged the US may require crypto transactions of $10,000 or more to be reported to tax authorities.

“Volatility of bitcoin is to stay elevated,” said Ben Emons, MD of global macro strategy at Medley Global Advisors in New York. Leverage that unwound in Wednesday’s tumble is already being replaced, he added in a note.

This week’s swings led to huge liquidations by leveraged investors and damaged the narrative that cryptocurrencies will become more stable as the sector matures. Musk’s actions showed how a few tweets can still upend the entire market.

Still, over a longer time horizon tokens such as bitcoin and ether are sitting on big gains. Over the past year, bitcoin is up more than 300% and ether 1,200%.

One takeaway from the past few days is a reiteration of the regulatory threat to the crypto market.

“Investors are underestimating the regulatory risk of crypto as governments defend their lucrative monopolies over currency,” said Jay Hatfield, CEO of Infrastructure Capital Advisors in New York. The possible imposition of transaction reporting requirements could be the “tip of the iceberg” of potential Treasury rules on virtual currencies, he said.

The Bloomberg Galaxy Crypto index is poised for a weekly tumble of more than 25%, the most since the market turmoil that accompanied the onset of the pandemic last year.

Despite downside risks and this week’s volatility — which saw bitcoin slide about 31% and jump roughly the same percentage on Wednesday — crypto bulls are undaunted.

They are sticking to the narrative that bitcoin offers a modern-day portfolio hedge and store of value, akin to digital bullion, and that blockchain-based financial services — so-called decentralised finance — are expanding.

“The institutional investors getting exposure to digital gold aren’t going away any time soon,” Paolo Ardoino, chief technology officer of crypto exchange Bitfinex, wrote in a note on Thursday. “Decentralised finance will continue to grow. Developers will continue to build.”

How arbitrage is taking the crypto industry by storm

Nutritional Holdings distances itself from cannabis currency due to investigation

Director Nikhyle Dasarath set up a company called CannaCrypt, which the JSE is looking into, offering huge investment returns on a cryptocurrency of ...
Companies
6 months ago
Next Article