Cryptocurrencies bounce back slightly after their crash earlier in the week, as the dollar stalls on talk of support tapering off 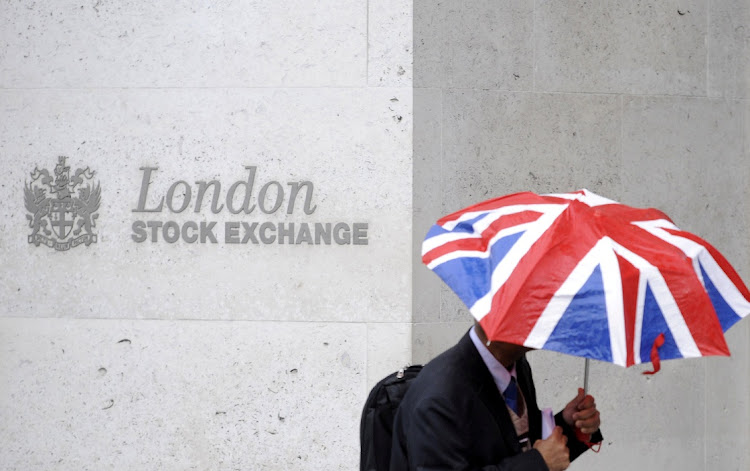 A worker shelters from the rain under a Union Flag umbrella as he passes the London Stock Exchange in London, Britain, in this October 1 2008 file photo. REUTERS/TOBY MELVILLE

London — Europe’s stock markets saw a tentative rebound on Thursday and bitcoin bounced more than 10% after one of its spectacular smashes, though tapering talk from the US Federal Reserve kept bond markets under pressure.

After Wednesday’s drama saw the main cryptocurrencies shed almost a third of their value at one point and the Stoxx 600 suffer one of its worst sell-offs of the year, traders are now watching a recovery unfold.

Commodities also steadied after a 5% overnight tumble in iron ore and coking coal caused by China’s cabinet announcing that it would take steps to curb “unreasonable” prices and behaviours that bid up costs.

Referring to drops in the most pumped-up asset classes, investment firm GMO’s head of asset allocation, Ben Inker, said: “Right now, the speculative bubble in the growth stocks seems to be deflating ... but is this the first innings of a broad deflation of equity markets?”

Markets are now walking a tightrope between strong growth and inflation, he added.

Minutes from the last US Federal Reserve meeting published on Wednesday showed “a number” of officials thought that if the recovery holds up, it might be appropriate to “begin discussing a plan for adjusting the pace of asset purchases”.

“This is very much the market view, really,” Singapore-based ING economist Rob Carnell said, with traders expecting strong hints over the middle of the year that the “taper”, as winding down support is known, is coming later in the year.

The yield on 10-year US treasuries had risen 4.1 basis points overnight to as high as 1.6830%. Europe’s equivalent benchmark. the 10-year German bund, was up almost two basis points in morning trade at a still negative -0.093%.

The dollar settled after scraping itself off a four-month low to hover around $1.2181 per euro. The dollar had also pushed through its 20-day moving average against the yen, and Aussie and New Zealand dollars, before taking a breather. It last bought ¥108.95 and the dollar index was last at 90.009.

On Wall Street overnight the S&P 500 closed 0.3% lower and the Nasdaq was flat, something of a recovery after each dropped more than 1.6% during the session. Futures markets were pointed to further modest falls later though.

The trigger for Wednesday’s sharp falls in bitcoin, ether and other cryptocurrencies appeared to be China’s move on Tuesday to reinforce strict curbs on crypto trading by barring financial institutions from providing transaction services.

Traders said the huge run-up in prices for the asset class in recent months meant that gravity also probably played a role, as well as Tesla CEO Elon Musk’s apparent cooling on bitcoin over the amount of energy consumed in processing transactions.

Musk had tweeted the “diamond hands” emojis on Wednesday that traders on social media use a sign they won’t sell.

“It’s not just crypto — though that is the poster child of this movement — but special purpose acquisition companies (SPACs), recent initial public offerings (IPOs), ARK Innovation and Tesla, to name a few, have all lost their bid,” said Chris Weston, head of research at brokerage Pepperstone in Melbourne.

SPACs, set up and listed to buy up other firms, enjoyed huge growth last year, as did the ARK Innovation fund that focuses on tech companies.

“For me, the overriding factor is liquidity and the timing of lower liquidity and that is having huge ramifications — we are debating, not just a slower pace of central bank asset purchases [quantitative easting (QE)], but when QE comes to an end.”

JSE strengthens ahead of MPC announcement on interest rates

Most analysts expect the MPC to keep the repo rate at its record low 3.5%
Markets
1 month ago