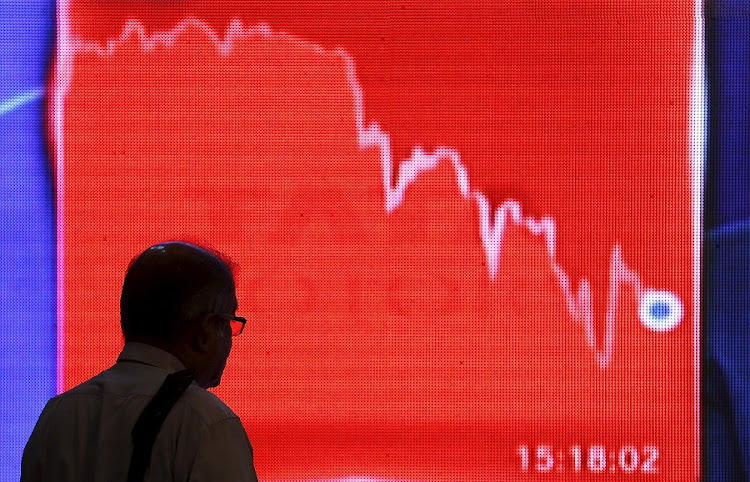 Stocks in Europe fell for a third consecutive session in early trading, taking their cue from weaker markets in Asia overnight, and a Wall Street pulled lower on Tuesday by Amazon and Microsoft as the earnings season gathered momentum.

Analysts said the rise in coronavirus infections across Europe and no sign of a vaccine anytime soon after two high profile prospects experienced problems was hitting sentiment.

Hopes for a US package to boost the coronavirus-hit economy before the presidential election in November have also fizzled out after US treasury secretary Steven Mnuchin said such a deal would be difficult.

“In Europe you just have a long list of quite notable actions being taken, with Paris and other French cities going into curfew, and today reports that London is going to the next, high level phase of restrictions,” said Derek Halpenny, head of research at MUFG.

“It's all pointing to a greater hit to fourth quarter activity and warrants a degree of adjustment in market pricing.”

“We have been trading in a range for quite some time and up until the beginning of this week, at the top end of it, and it's a trend that is likely to continue,” said Michael Hewson, senior market analyst a CMC Markets.

A two-day summit of EU leaders starts on Thursday as the EU and Britain continue their efforts to overcome stumbling blocks, such as fishing rights and competition safeguards, to agreeing a trade deal before the UK's Brexit transition arrangements end on Dec. 31.

British Prime Minister Boris Johnson had said he would walk away from the talks if there was no deal by Oct. 15, but this threat has now eased.

“Today is unlikely to be ‘doomsday’ for the British pound, as talks are expected to go on between the UK and EU negotiators beyond the supposed 15 October deadline,” UniCredit bank said in a note to clients. The pound barely budged whereas the euro was a touch lower against the dollar at $1.1726.

Investors will tune into European Central Bank President Christine Lagarde, who takes part in a debate on the global economy at 4pm GMT as part of the IMF and World Bank's annual meeting which is being held virtually.

No major eurozone economic data is expected, but in the US, markets will take stock of the latest jobless claims figures.

With traders seeking safety again, Germany's government bonds rallied to leave their yields at their lowest level since the March spread of Covid-19 caused the global meltdown in stock markets and other riskier assets.

Oil prices also fell as the renewed surge in the virus in large parts of the world underpinned concerns about economic activity.

Oil holds steady after fall in US crude stockpiles

The inventory drop is a temporary consequence of Hurricane Delta, says an analyst
Markets
11 months ago

Dollar takes shine off gold as US stimulus wrangle continues

WATCH: What will dominate the market in the next 18 months