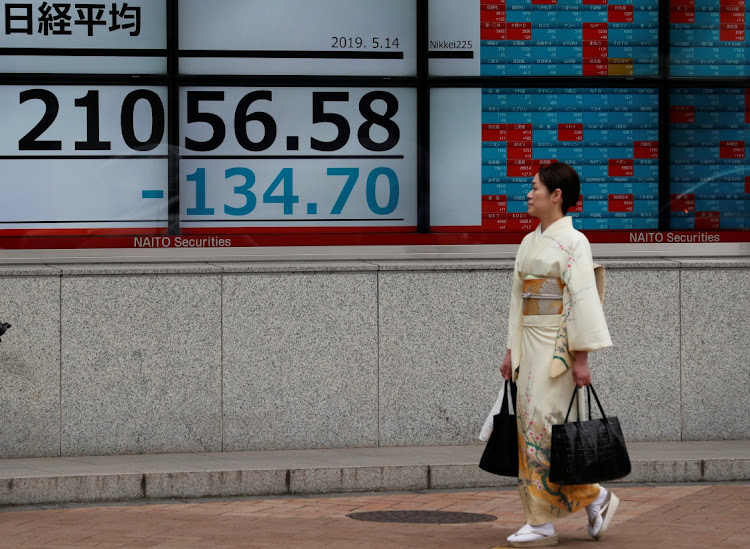 A woman walks past an electronic board showing the Nikkei stock index outside a brokerage in Tokyo, Japan. Picture: REUTERS/KIM KYUNG-HOON

Tokyo/New York — Asian shares slipped on Wednesday as investor concerns about rising tensions between the US and China tempered optimism about a reopening of the world economy.

US President Donald Trump said late on Tuesday he is preparing to take action against China this week over its effort to impose national security laws on Hong Kong, but gave no further details. Hong Kong shares led declines among major regional indices, with the Hang Seng falling 0.46%, though it kept a bit of distance from a two-month low touched on Monday. MSCI’s ex-Japan Asia-Pacific index lost 0.12%, with mainland Chinese shares down a similar amount.

Worsening relations between the world’s two biggest economies could further hobble global business activity, which is already under intense pressure due to the coronavirus pandemic.

E-Mini futures for the S&P 500 rose 0.4%, reclaiming the 3,000 chart level. The index had cleared 3,000 points in Wall Street overnight before pulling back, as some traders returned to the New York Stock Exchange floor for the first time in two months.

“The S&P 500 looked to be set to close above 3,000 until the late headline that the US was considering a range of sanctions on Chinese officials and businesses should China go ahead with its legislation regarding Hong Kong,” analysts at the National Australia Bank said in a note.

“The extent of those possible sanctions is uncertain,” the analysts said.

China’s plans to impose national security laws in Hong Kong have triggered the first big street unrest in the Asian financial hub since 2019. Overnight, hundreds of riot police took up posts around Hong Kong’s legislature in expectation of protests on Wednesday.

Still, the index of world’s 49 stock markets stood near two-and-a-half-month highs, having gained 2.6% so far in May on hopes of economic recovery in the developed world as countries ease social restrictions.

Economic data published on Tuesday showed US consumer confidence nudged up in May and new home sales beat expectations.

“We have seen a clear sign of rising expectations in economic recovery. Now we are beginning to see evidence of various stimulus supporting the economy,” said Toshifumi Umezawa, strategist at Pictet.

US. Treasury yields retreated from lows, with ten-year yields at 0.692%, having risen about 4 basis points on Tuesday.

Gold prices rebounded from losses as some investors played it safe, with spot gold unchanged at $1,710.9/oz.

The retreat from risk led oil prices to give up earlier gains. US West Texas Intermediate crude futures were down 1.2% at $33.95 per barrel.

JSE to contend with mixed Asian markets on Wednesday

Listen here for the African Business podcasts, hosted by Desné Masie and featuring trailblazers and leading thinkers from across the continent.
Companies
10 months ago
Next Article