The teaser pic shows a bold new face for the large, seven-seater SUV 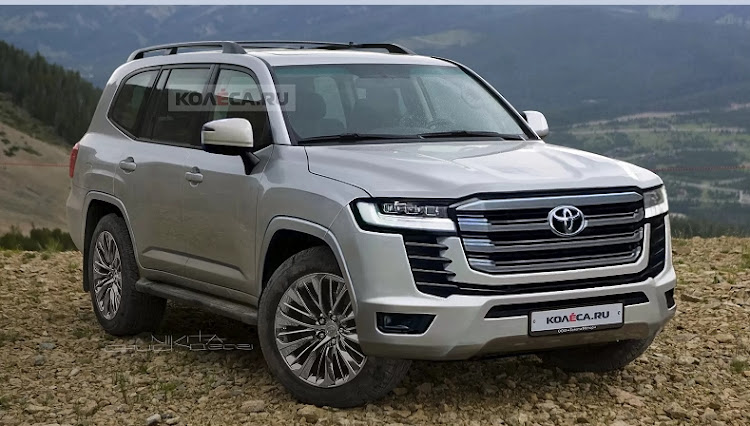 This rendering based on spy pics shows a prominent new grille and slim headlamps for the upcoming Land Cruiser 300. Picture: KOLESA.RU

The international reveal of the new Land Cruiser 300 is imminent, and Toyota’s luxury all-terrainer will be in SA by the end of 2021.

Spy pictures and renderings reveal that the large SUV retains the tough, boxy styling of the outgoing Land Cruiser 200 launched in 2007, but adopts a bold new face with a prominent new grille and slim headlamps.

Russian motoring website Kolesa produced a rendering from spy shots of the vehicle, showing off slim new headlamps with LED daytime running lights, and a taller grille with four louvres. The rear displays slimmer tail lamps with a U-shaped light signature, and the wheel arches will have sharper contours.

The Land Cruiser 300, a rival to vehicles like the Nissan Patrol and Land Rover Discovery, is expected to grow slightly in length and wheelbase to provide more room inside the seven-seater cabin with its three rows of seats.

There are no shots of the interior but the big, all-terrain Toyota will be modernised with items such as the latest multimedia system and a wireless cellphone charger.

A 313kW/589Nm petrol twin-turbo V6 is also on the cards, with a petrol-electric hybrid likely to be added to the range at a later date. Transmission duty will be performed by a 10-speed automatic via permanent all-wheel drive, with a low range transfer case.

The Land Cruiser’s well known for its off-roading prowess and the new version is likely to retain a rock-straddling ground clearance and selectable modes for different off-road conditions such as mud and sand.

Toyota SA expects the new Land Cruiser 300 to arrive here in August or September, with prices and specifications to be confirmed closer to the time.

With more power and updated tech, the seven-seater SUV is a top choice for family expeditions
Life
5 months ago