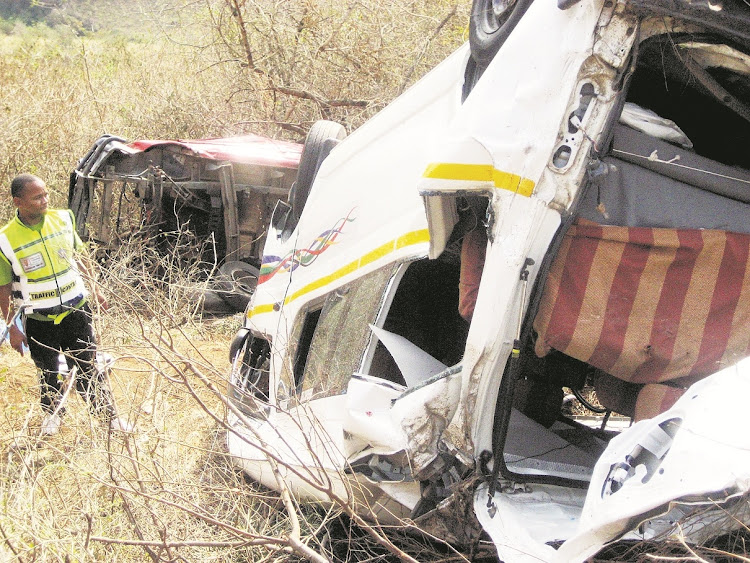 A 2015 WHO report found that SA has the world’s highest prevalence of road deaths associated with alcohol abuse. Picture: SUPPLIED

The day nears when you won’t be able to have “just a couple of beers” before driving.

Strict new drunk-driving laws will make it illegal for drivers to drink any alcohol, compared to the current law which allows you to have a blood alcohol level of up to 0.05g per 100ml — or just 0.02g per 100ml in the case of a professional driver.

Transport minister Fikile Mbalula’s new zero-tolerance approach to drunk driving was drafted in the National Road Traffic Amendment Bill issued in April, although there is no indication of how soon it will be implemented. Before it becomes law the bill must go before parliament for assent, and no time frame has been given for this.

Mbalula said the bill’s main focus was to reduce road carnage, and his anti drunk-driving campaign is backed by some startling numbers.

A 2015 WHO report found that SA has the world’s highest prevalence of road deaths associated with alcohol abuse. It estimated that 58% of all collisions on our roads were attributed to alcohol, and Arrive Alive reports that half the people who die on our roads have a blood alcohol level above the legal 0.05g per 100ml limit.

In the most recent festive season, more than 24,000 people were arrested for being under the influence of alcohol while driving, close to a third of all arrests made over the period.

SA records about 14,000 road deaths a year and remains one of the world’s most dangerous countries to drive in. It is listed 13th out of 195 countries in the number of road deaths per capita, with an alarming 28.2 road deaths per 100,000 population, according to a study released in January by the Institute for Health Metrics and Evaluation (IHME).

Many of the dangerous and undisciplined driving practices witnessed on our roads are exacerbated by the use of alcohol.

Apart from the danger to life and limb, drunk driving can result in a hefty fine or jail time with a criminal record, and can also invalidate your car insurance.

Insurers can refuse to pay accident claims if the driver’s blood alcohol level is over the legal limit, however with existing laws this is difficult to determine, and whether their driving ability was in fact impaired.

“If you break the law by driving with alcohol in your blood, your insurer will have no obligation to meet your claim.”

Drivers guilty of this offence are also likely to have their premiums hiked as they’re considered a higher risk.

In the worst-case scenario, if you’re convicted of drunk driving or have your licence endorsed or suspended, your current insurer may cancel your policy, and you may find it difficult to get car insurance at all in future, says King Price.

While the new law will potentially reduce the number of accidents caused by drunken driving, it won’t immediately affect premiums, says Van Vuuren.

In fact, there’s a potentially positive flipside in that fewer drunken driving accidents could in the longer term see premiums reducing due to lower claims costs for insurers.

The bottom line? Once Covid regulations are relaxed to the point where social gatherings are allowed again, make sure you have another form of transport if you have a drink or two, says Van Vuuren.

Apart from taxis and ride-sharing services like Uber, there are a number of drive-you-home services including Road Trip, and a number of insurers have in-house services.

“Make Uber your friend, or get a designated driver. But make a plan. It’s just not worth taking the risk of getting behind the wheel,” says Van Vuuren.

SA remains one of most dangerous countries to drive in

Purchasing a vehicle on auction can land you a good bargain, but look out for the pitfalls
Life
9 months ago

BMW invests in Prometheus, which will begin selling its carbon-neutral fuel at US petrol stations in 2020
Life
9 months ago
Next Article

BMW M5 gets a midlife update

These are the cars that SA owners recommend most

BMW M5 gets a midlife update

These are the cars that SA owners recommend most