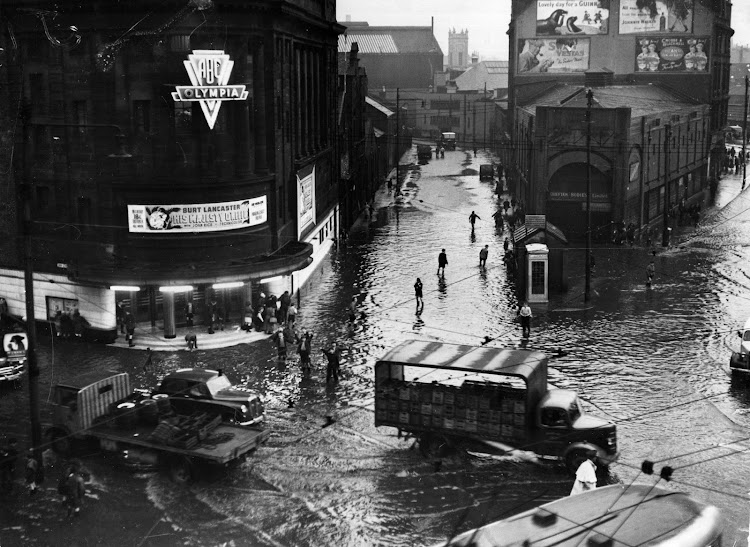 A flooded Bridgeton Cross in Glasgow in 1954. Today, the city faces an increased risk of flooding due to climate change. Picture: KEYSTONE/GETTY IMAGES

The last time the river running through the Scottish city of Glasgow overflowed its banks with deadly results was nearly three decades ago. Days of torrential rain reached the breaking point just two weeks before Christmas 1994, and two people died in floods that swamped the city’s SEC Centre and caused more than £100m in property damage.

Back then James Curran oversaw flood-warning systems across the region. As the storm intensified, he was dispatched to the basement of a local police station to help co-ordinate the emergency response, relaying readings from river and tidal gauges to rescue workers. It caused disruptions, such as the cancellation of a sold-out concert by rock star Meatloaf at the SEC Centre.

That since renovated venue in the centre of Glasgow — now named the Ovo Hydro — will welcome world leaders and thousands of attendees for a crucial UN summit on climate change in November. The COP26 summit kicks off right in the heart of Scotland’s flood season. Negotiators could face rainy conditions that swell the River Clyde, which sluices through the city, to potentially dangerous levels.

“We’re in uncharted territory with the frequency and severity of floods we’re experiencing now,” says Curran. Today he chairs Climate Ready Clyde, a group that is helping the region to better prepare for the effects of global warming. “There’s no question that the risk across all potential flooding areas in Glasgow city region will escalate in the decades to come.”

The Scottish Environment Protection Agency estimates that about 170,000 people in and around Glasgow face risks from flooding, a number that is set to rise about 30% by the 2080s. Damage from floods will cost the region about £100m a year by mid-century.

Heightened flood risk has become a global phenomenon. Over the past few decades, Scotland has seen more heavy downpours, accelerating sea-level rise and cutting the number of days with frost and snow cover. Glasgow received 125% its average annual rainfall in 2020. Torrential rain this August submerged one street under about 1.2m of water.

It remains unlikely that flood conditions will be repeated this November, just as the climate talks are under way in Glasgow. But the city still faces dangers from the altered climate. Deluges of water can pool in the streets with nowhere to go. Rivers can overflow. Coastal flooding in the region has also become a more pronounced risk as sea levels rise.

We’re in uncharted territory with the frequency and severity of floods we’re experiencing now.

Heightened flood risk is now a global phenomenon, with average temperatures worldwide more than 1.1ºC above preindustrial levels. Northern Scotland’s annual mean sea surface temperature has increased as much as 0.24ºC per decade since 1990. Meanwhile, rainfall patterns have changed, with more heavy downpours, accelerating sea-level rise and fewer days with frost and snow cover, according to Adaptation Scotland.

While the UK has one of the world’s most aggressive targets to decarbonise its economy, the country’s climate change committee has warned that not enough is being done to protect British residents from the effects of warming temperatures.

Curran is among those working to change that in Glasgow. The climate adaptation plan his team is developing is part of an EU effort to provide examples that local governments across the continent can learn from. Many of the solutions for flooding, such as building up depleted peat lands, turning sealed culverts into open waterways, and building up park space, aim not only to store more water during periods of intense rain but also make the city a more pleasant place to live.

“The idea is to have the whole city be more spongy,” says David Harley, head of water and planning at the Scottish Environment Protection Agency. “It’s the difference between a functional, unhealthy dangerous place in the long term and one that can thrive and survive and be successful in a changing climate.”