Contrasting views in parliament on how to address fiscal crisis

Some say austerity will make things worse, some say we need to cut government expenditure, but all agree that they don’t like the medium-term budget 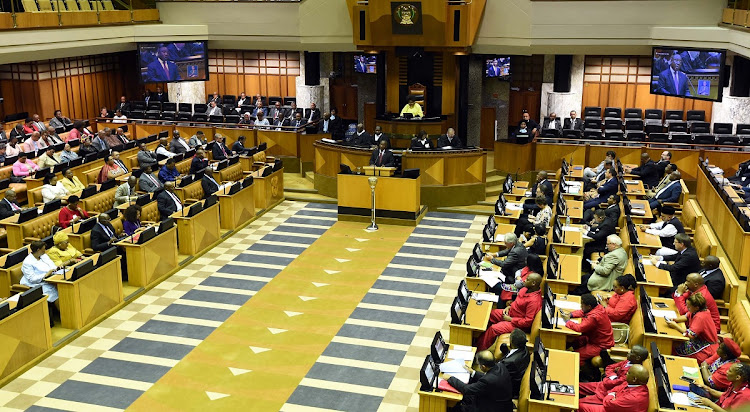 MPs deliberate during a session in the National Assembly. File photo: SOWETAN/SIYABULELA DUDU

Contrasting views on how to address SA’s fiscal crisis — either by increasing expenditure or cutting it — were presented to parliament’s two finance committees on Wednesday.

About 20 civil society organisations represented by the Budget Justice Coalition (BJC) argued that what is needed during this time of low growth is not austerity measures but an economic stimulus.

On the other hand, the SA Institute of Chartered Accountants (Saica) urged that expenditure be cut, notably by drastically reducing the public-sector wage bill.

These arguments were presented in submissions during public hearings on the medium-term budget policy statement (MTBPS) tabled in parliament last week by finance minister Tito Mboweni.

BJC’s Daniel McLaren and Busi Sibeko argued that “austerity is bad for growth, employment, equity and service delivery”. They said that the medium-term budget proposed moving SA into deepened austerity, which had failed internationally in stimulating growth and reducing budget deficits. It has also had a harmful effect on service delivery.

November will be an important month for the economy, with two ratings reviews scheduled and the holding of the year’s last monetary policy committee ...
Companies
2 years ago

“The National Treasury’s implementation of regressive austerity policies has only served to drag economic growth down further and the debt-to-GDP ratio higher,” the BJC said. “Austerity is self-defeating during recessionary times. Cutting expenditure and poorly chosen tax hikes (such as regressive taxes like VAT) can further depress economic activity by taking demand out of the economy.

“Because debt levels are measured as a ratio of debt to GDP, if measures to tackle debt lead to or worsen low economic growth, then debt relative to the (shrinking) GDP will go up, not down.”

The coalition recommended that the expenditure ceiling should not be cut further as proposed by the Treasury in the medium-term budget. It proposed instead that SA accept significantly higher levels of debt for the medium term. The debt target should be set much higher, for example at 70% of GDP. The share of tax revenue of GDP should likewise be increased to 32%; and the corporate tax rate should be increased and the rich taxed more.

Saica senior executive Sharon Smulders reiterated Mboweni’s statement that SA is spending more than it earns, which means that debt has increased to unsustainable levels. She urged a drastic reduction in the public-sector wage bill.

Smulders said there is no more scope for further tax increases, as the tax to GDP ratio is now 29.3% compared with the world average of 15.4%. The corporate tax rate of 28% is also much higher than SA’s main trading partners and other developing countries, while individual taxpayers are already overburdened.

“Previous tax increases are already hurting the economy and more increases will do even further damage,” Smulders said. “What SA needs now is leadership that is courageous enough to not only talk about the tough decisions that need to be made but to actually make them. SA is in crisis.”

CLAIRE BISSEKER: Time for SA to bite the bullet of real fiscal consolidation

The Fiscal Cliff Study Group’s Jannie Rossouw, who is head of the Wits University school of economics and business sciences, warned that the fiscal cliff precipice has moved closer by one year. The fiscal cliff is the point at which civil service remuneration, social grant payments and debt service costs absorb all government tax revenue. At the moment, the level is 72.3%. SA has no option now but to rein in government expenditure, Rossouw said.

Cosatu parliamentary co-ordinator Matthew Parks said the federation is “extremely disappointed by the government’s shockingly weak and inadequate” medium-term budget. No clear plans were presented to address the crises facing the country. “To say it was a wasted opportunity is a huge understatement. The government has failed to rise to the challenge.”

No plans were announced to turnaround the bleeding state-owned enterprises (SOEs). Parks said Cosatu will be seeking urgent engagements with President Cyril Ramaphosa, the ANC leadership and the government to reach agreement on the interventions needed to address the challenges in preparation for the February 2020 budget.

In an interview, Parks said Cosatu supports cutting the public-sector wage bill at the level of highly paid managers and highly paid administrative staff, but not for nurses, teachers, police officers and other integral public workers.

The Financial and Fiscal Commission, in response to the MTBPS, says policy and implementation are the cornerstones of restoring and fiscal credibility
Economy
2 years ago

Are ministers more worried about their cars than the country?
Opinion
2 years ago
Next Article