The step is required to address concerns about the company’s trading activity, says Kerem Aksoy of Glacier Pass Management

A US-based investor in local technology firm Adapt IT has dared Huge Group to publicly release information about its share buyback programme, after allegations that Huge artificially propped up its share price as a way to back its buyout bid for the company started by business person Sbu Shabalala.

Johannesburg-based Adapt IT, which provides software solutions to the education, manufacturing, energy, financial services, communications and hospitality sectors, is subject to an R800m takeover bid from tech peer Huge Group.

Aksoy suggests that Huge Group — which has subsidiaries operating in the telecoms, media, technology and software industries — manipulated its share price, which rose about 40% over six weeks through a share buyback programme, to make it more viable to launch its share-based offer for Adapt IT.

“We ask that Huge Group publicly disclose their monthly buyback volumes for the past six months via Sens [the JSE news service] to clear up this issue,” Aksoy told Business Day on Tuesday.

“This deal is dead on arrival,” Aksoy said.

Shareholders cannot ask one another how they will vote, but he predicts the company’s management, which owns 17%, “are a no”. 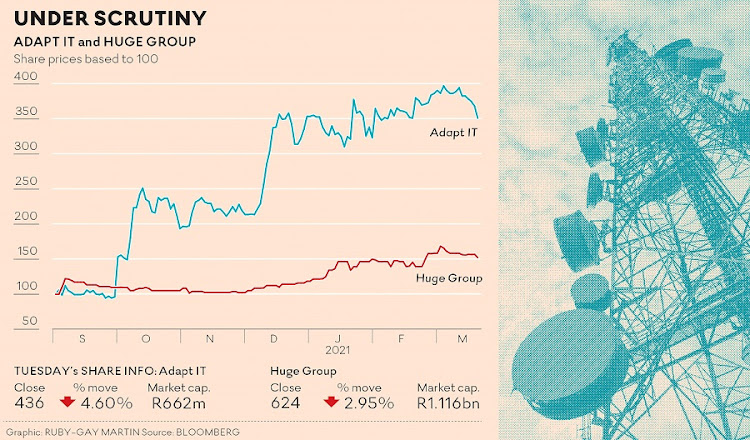 The two big institutional shareholders, at about 15%-20%, are Sanlam and Nedgroup. “Sanlam was buying shares in 2015 at R10+ and opposed to a hedge fund which might entertain a quick flip to a mutual fund,” said Aksoy.

Sanlam doesn’t own shares in Huge, he said. “So we know their analyst doesn’t like it. They are not going to agree to a deal at half their original purchase price paid in shares of a company they don’t like. Same with Nedgroup.”

The next bucket of shareholders is former vendors, at 15%-20% of equity. “These people sold their businesses to Adapt IT for shares, went to work for Adapt IT and liked Sbu and Tiffany [Dunsdon, chief commercial officer] so much that they decided to keep their shares.”

Dunsdon has been with company since 2002.

Out of the gate, Aksoy said more than half of the shareholders are likely to vote against the deal. The rest of Adapt IT’s shares are held by retail investors.

“Adapt IT and Huge are doing the same math as me. This deal has nothing to do with a merger and is just about Huge Group trying to pick off a portion of Adapt IT’s retail shareholders.

If shareholders want to exchange their Adapt IT share for a Huge share, “that is their choice. They should just know that these companies are not merging,” said Aksoy.

“We are voting no. If someone wants our shares they [had] better be prepared to pay four to five times the current share price. Otherwise get lost”.

Diversification pays off for Adapt IT during Covid-19

The company is in the throes of evaluating an unsolicited bid from fellow small cap Huge Group. We spoke to Adapt IT CEO Sbu Shabalala
Money & Investing
2 months ago
Next Article

Adapt IT balks at Huge plan

Adapt IT balks at Huge plan