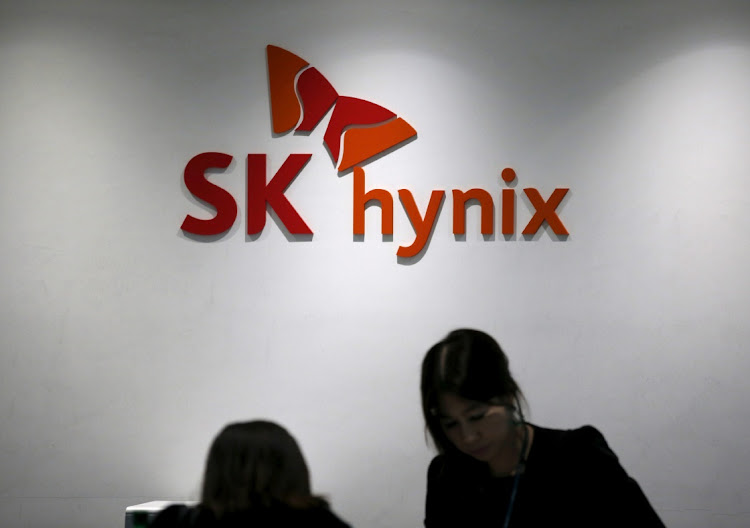 Employees talk in front of the logo of SK Hynix at its headquarters in Seongnam, South Korea. Picture: REUTERS/KIM HONG-JI

Seoul — Intel has agreed to sell its NAND memory unit to South Korea’s SK Hynix for about $9bn, the company said on Tuesday, in a deal that allows the US chipmaker to concentrate on its main business while shoring up the Asian company’s position in a booming market.

The chipmaker will pay 10.3-trillion won (about $9bn) for the Intel unit, which makes flash memory components for computers and other devices. The acquisition, which will take place in stages until the end of 2025, includes Intel’s solid-state drive, NAND flash and wafer businesses, as well as a production facility in the northeastern Chinese city of Dalian.

The deal should shore up Hynix’s position in a business that has boomed after Covid-19 drove demand for the chips used in everything from Apple’s iPhones to data centres. It whittles down another player in an industry the Korean company dominates alongside Samsung Electronics and Micron Technology, potentially buoying NAND flash prices. Hynix’s shares fell about 1.8% after analysts raised concerns about the price tag on its largest acquisition ever.

“Hynix is now entering the hyperscale control chip business by purchasing Intel’s business. Although there is some scepticism about the price of the deal, I think this won’t be a burden because it will ensure solid long-term cash flow,” said Greg Roh, an analyst at HMC Securities. “The market consolidation is good news for Korean memory chipmakers, and will alleviate oversupply issues.”

Intel has said for months it was exploring options for the flash group. However, Hynix will not be buying the Optane division, which develops chips that can permanently store data and read and write it faster than NAND — if not faster than traditional DRAM. The product, which went on sale in 2018, was tested successfully by some large cloud providers and Alibaba used the technology to support its huge Singles’ Day sales.

Intel CEO Bob Swan described Optane as “something special” in 2019.

Citigroup advised Hynix, while Bank of America did the same for Intel. The deal could allow Hynix to surpass Kioxia — a Toshiba spin-off — in the Nand flash market, in particular, according to Bloomberg Intelligence analyst Anthea Lai.

The acquisition also further streamlines Intel’s struggling empire. Since taking over in 2019, Swan has looked to sell several units that are not part of the company’s focus on processors for personal computers and servers.

The Santa Clara, California-based company has delayed production of important coming chip lines and now lags behind some industry players in manufacturing technology. Its shares are down about 9% so far in 2020, while the benchmark Philadelphia Semiconductor Index is up almost 29%.

Despite the delays, the company’s server group has been performing well. Shedding another noncore business could help Intel focus on fixing its chip technology woes.

Intel unloaded its smartphone cellular modem group to Apple in 2019 and in 2020 it sold its home connectivity chips group to MaxLinear. In July, the company said it was considering moving away from manufacturing its own chips, potentially benefiting contract producers such as Taiwan Semiconductor Manufacturing and Samsung.

STEPHEN CRANSTON: Who’s up for some private equity?

Most start-ups in SA are backed by existing corporates, not private equity funds
Opinion
8 months ago

One company can’t push the Nasdaq around, as some have suggested, says Rajeev Misra, because the bourse is just too big
Companies
8 months ago
Next Article

SMIC dives 23% after report says US may blacklist chipmaker

SMIC dives 23% after report says US may blacklist chipmaker