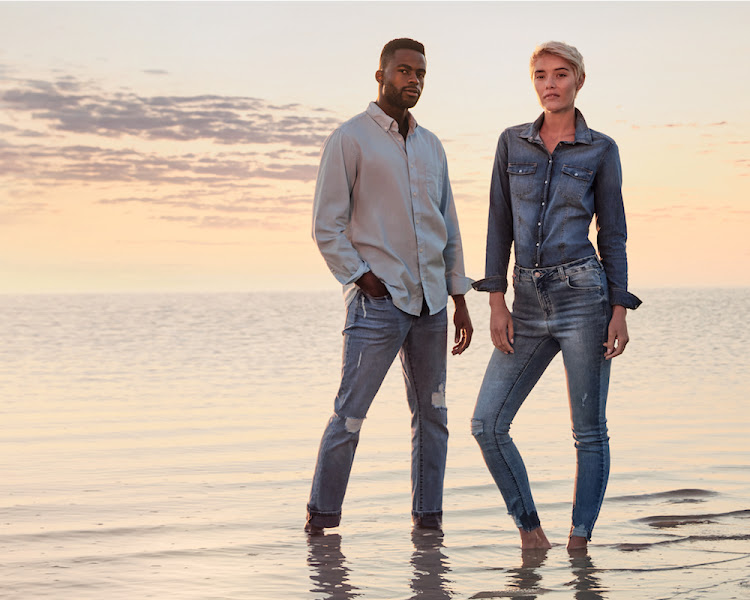 The group reports a strong operational and financial performance, notwithstanding the impact of Covid-19 over the past year. Management actions to stimulate trade, manage margins, contain costs and pay down debt have resulted in a pleasing set of results and a stronger balance sheet.

Trading conditions over the financial year are not directly comparable to the previous year, given the extensive impact of the pandemic.

Trade across the group continued to improve, notwithstanding uncertainty and business disruption, worsened by the delay of the Covid-19 vaccine rollout, further outbreaks and related lockdowns across SA and Australia. The improved trade performance, coupled with strong working capital management and the proceeds arising from the property sales in Australia, resulted in positive cash flows and a significant reduction in net debt across the group.

The following factors contributed to the group results and financial position: 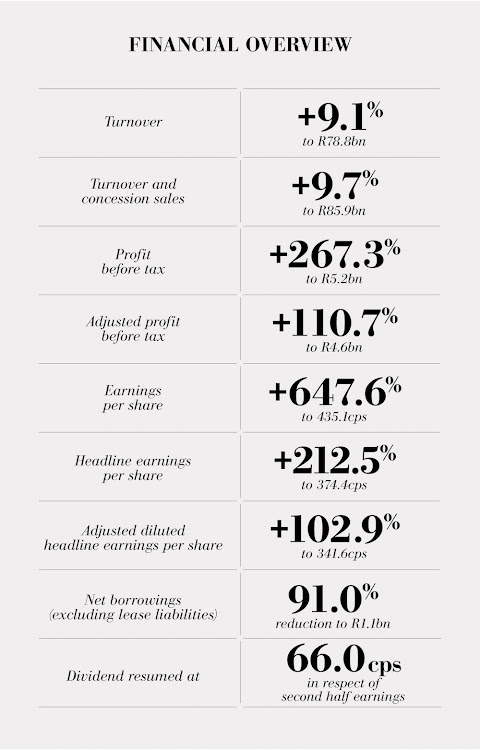 SA’s recovery from the Covid-19 pandemic has been set back by the onset of the third wave towards the end of the fourth quarter. The consequential level 4 restrictions further dampened already-weak consumer confidence, which is expected to limit discretionary spend. Furthermore, the recent civil unrest and related widespread destruction of property in KwaZulu-Natal and parts of Gauteng will also affect economic conditions and consumer sentiment. The group has reopened two stores to date, with a further eight expected to be opened within the next four weeks. The Maxmead Distribution Centre has also resumed full operations and is continuing to work with Woolworths insurance assessors regarding its claims.

Turnover and concession sales for the current year grew by 6.9%, and by 5.7% in comparable stores. The Woolworths Food business grew both market share and volumes during the period despite the high base set in the previous year driven by stockpiling ahead of the first lockdown. Price movement was 5.2%, with underlying product inflation of 4.9%, while net space increased by 0.6%. Sales in the second half of the current year grew by 3.2%, and by 16.9% over a two-year period.

Woolworths continues to invest in price in key product categories to improve its value proposition, while remaining focused on product quality, innovation and convenience. Online sales grew by 117.9% over the current year, contributing 2.3% to its SA food sales. This was supported by the expanded click-and-collect offering and the rollout of its on-demand delivery service Woolies Dash.

Gross profit margin of 24.5% was 0.4% lower than the previous year as a result of further price investment and the growing online contribution which were partly offset by volume rebates and distribution cost efficiencies. Expenses, including additional Covid-19 related costs, grew by 6.1%. Adjusted operating profit increased by 3.9% to R3.009m, returning a post IFRS 16 operating margin of 8% for the current year.

Total revenue for the current year increased by 3.5% and by 4.2% in comparable stores, while sales in the second half of the current year grew by 24.1% on the previous year’s non-comparable base. The sales performance of the Woolworths FBH business continues to be affected by several factors, including the constrained environment, the decline in demand for formalwear, as well as our initiatives to streamline our private label offerings and rationalise unproductive space.

Price movement in FBH was 7.5%, and 5.3% in Fashion, due to the higher promotional activity in the previous year. Online sales grew by 114.4%, contributing 4.1% to SA sales. The reduction in net space of 6.4% has translated into improved trading densities.

Gross profit margin increased by 1.5% to 45.5%, as a result of a higher level of clearance in the base. Expenses grew by 5.4%, with additional Covid-19 related costs, as well as UIF TERS and rent relief in the base. Adjusted operating profit increased by 14.2% to R1.083m, resulting in a post IFRS 16 operating margin of 8.4% for the current year.

In Australia, stronger economic fundamentals, improved consumer confidence and restrictions on international travel, supported inward-focused consumption and buoyed retail spend. This was despite the intermittent snap lockdowns across major cities and an extended three-month lockdown in the state of Victoria during the first half of the current year and a further lockdown in the last quarter. Foot count in central business districts and airport locations remains well below pre-Covid-19 levels.

DJ turnover and concession sales over the period increased 2.3% and by 0.9% in comparable stores, with second-half sales up 17.1%. Online sales increased 24.4% and contributed 17.3% to total sales for the current year. In line with the stated intention of exiting unproductive space, trading space was reduced by 6.3%. Sales in the Elizabeth Street flagship store grew 16.6% during the current year, notwithstanding the lower foot count in the Sydney CBD.

CRG delivered strong sales growth of 13.5% over the current year and 15.3% in comparable stores, with second-half sales up 39.5%. This result was underpinned by the robust performance of the Country Road brand and through refreshed product offerings across all brands. Online sales increased 30.7% and contributed 29.7% to total sales, while trading space was reduced by 2.8% for the current year.

Gross profit margin increased 2.2% to 60.8% due to increased full-price sales. Expenses for the current year reduced by 0.4%, mainly from store closures and a reduction in discretionary spend, as well as higher levels of government support and rent relief in the current year compared with the previous year. Adjusted operating profit increased 158.3% to A$155m, resulting in a post-IFRS 16 operating margin of 14.7%. 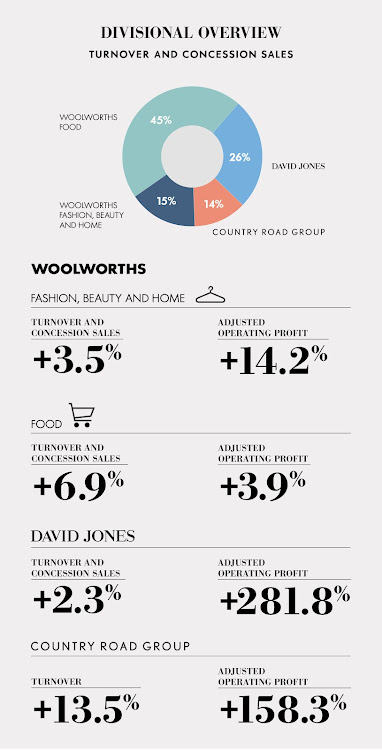 The trading outlook in both regions is uncertain and will be affected by further Covid-19 waves and resulting lockdowns and restrictions, as well as the slow pace of vaccination in both regions. In Australia, lockdowns are curtailing trade in our brick-and-mortar stores, while SA is in the middle of the third wave and the after-effects of recent civil unrest are also likely to be felt for some time.

Nonetheless, we have a stronger foundation and will continue to respond tactically to any immediate challenges, while remaining steadfast in the execution of longer-term objectives.

Woolworths would like to express its gratitude to all its employees, particularly those on the front line, who courageously put the needs of their colleagues and customers ahead of their own. It would also like to thank its suppliers and partners for their commitment to our business, as well as its customers for their continued support. The past year has again shown the resilience of the business, driven by the passion and commitment of all its people.

Any reference to future financial performance included in this announcement has not been reviewed or reported on by the group’s external auditors and does not constitute an earnings forecast.

The board of directors have declared a final gross cash dividend per ordinary share (dividend) based on a payout ratio of 60% of second-half headline earnings of the combined Woolworths SA business segments (FBH, Food and WFS).

The board has declared a final gross cash dividend per ordinary share (dividend) of 66c (52.8c net of dividend withholding tax) for the 52 weeks ended June 27 2021, a 25.8% decrease on the previous year’s 89c per share. The dividend has been declared from reserves and therefore does not constitute a distribution of “contributed tax capital” as defined in the Income Tax Act, 58 of 1962. A dividend withholding tax of 20% will be applicable to all shareholders who are not exempt.

The issued share capital at the declaration date is 1,049,977,230 ordinary shares. The salient dates for the dividend will be as follows:

Share certificates may not be dematerialised or rematerialised between September 15 and 17 2021, both days inclusive. Ordinary shareholders who hold dematerialised shares will have their accounts at their CSDP or broker credited or updated on September 20 2021.

Changes to the board of directors and board committees

As announced on Sens on August 23 2021, Zyda Rylands has resigned from the board and as a member of the WHL risk and compliance, social and ethics and sustainability committees with effect from September 30 2021.

The board expresses its appreciation to Rylands for her valuable contributions as an executive director. 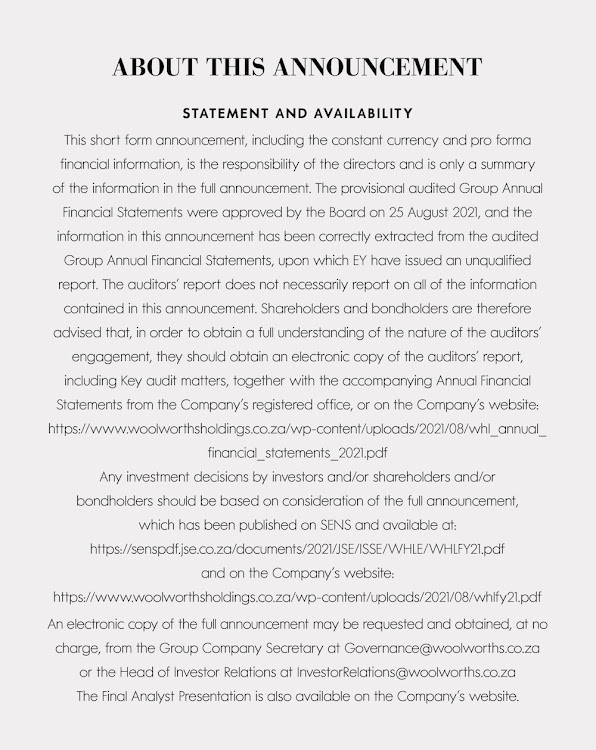 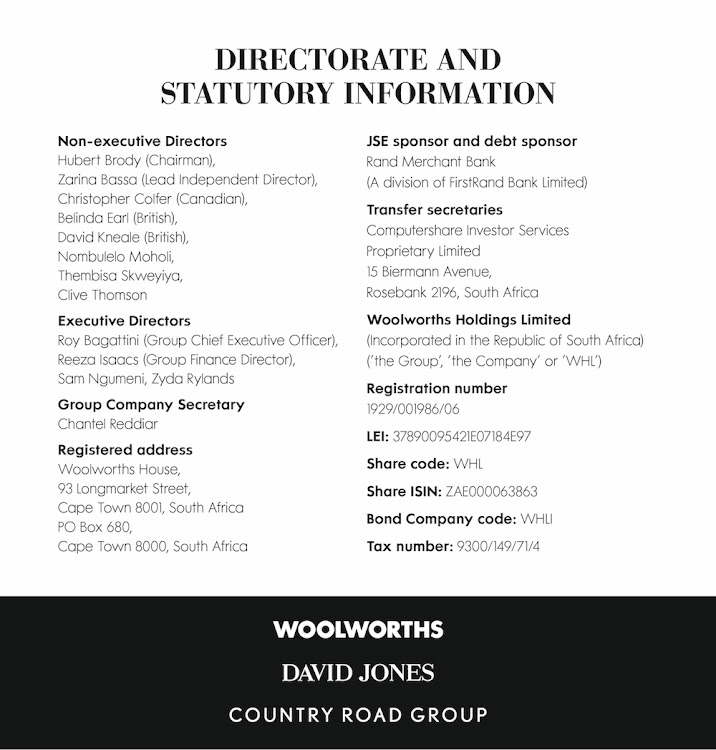 This article was paid for by Woolworths.