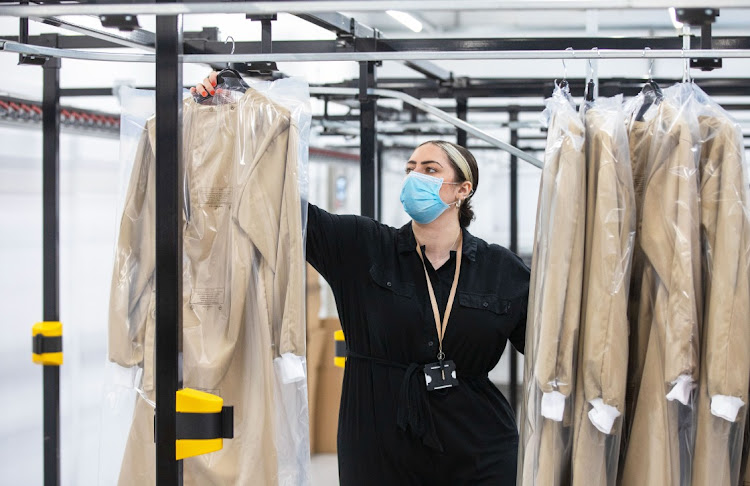 Burberry’s decision to eliminate discounts is showing progress as the brand aims to elevate the image of its products in the eyes of luxury consumers.

Burberry shares rose as much as 5.9%, the most in two months in London trading. The brand has been phasing out markdowns, leading to an improvement in full-price sales during its fiscal third quarter. The stock is still down 20% over the past 12 months.

“Our communication and collections resonated well with new, younger clientele,” Burberry CFO  Julie Brown said on a call with journalists.

The shift in strategy led investors to overlook a bigger-than-expected 9% drop in overall retail sales on a comparable basis. A team of Morgan Stanley analysts led by Edouard Aubin said that was a “quantitative miss” but a “qualitative beat”.

Luxury companies have been facing the challenge of on-off policies that closed, then opened and then closed retailers again from October in many European countries. The measures are particularly disruptive since the industry still sells the bulk of its products in stores, with sales teams catering closely to customers’ needs, an experience that’s not as easy to replicate online.

Burberry’s performance was mixed geographically: The appetite of shoppers in Asia Pacific was strong with 11% growth but Europe, the Middle East, India and Africa saw a 37% deceleration, mainly hurt by the lack of tourists. The Americas also saw an 8% revenue decline, according to a statement Wednesday.

Brown said the UK was the worst-hit country in the region in the quarter. London with its flagship stores is heavily affected due to the lack of tourists and the absence of workers in the centre of the capital, she said.

Brown said Brexit will lead to additional administrative and operating costs, which she estimates to be in the “low millions” of pounds. The company is aiming to minimise the flow of products across the EU border.

The company said 15% of its stores are still closed, with more than one-third operating on reduced hours. Burberry warned of “headwinds” for the current quarter amid the spread of more transmissible virus variants.

Though there are hopes the fast vaccine rollout in the UK will increase its chances of managing the pandemic, the nation entered a third lockdown in January that led footfall on shopping streets to “fall like a cliff”, according to Niraj Shah, European economist at Bloomberg Economics. In China, a virus resurgence is threatening consumer demand during the crucial Lunar New Year holiday.

Brown said the company now has one store closed in the Hebei province and it’s seeing a “relatively low” Covid-19 affect on its operations in the northern region of China.

China has been the luxury industry’s bright spot since the start of the pandemic. With Chinese consumers unable to travel abroad, many splurged on luxury items in their home market. Burberry has been trying to lure those shoppers. In July, it opened a new concept store in Shenzhen backed by Tencent technology that blends physical and digital experiences.

Sales rose in the group’s quarter to end-December, driven by robust demand in China, the Middle East and Africa
Companies
2 months ago

Online sales continued to rise in SA, UK and Australia
Companies
2 months ago

How Truworths is surviving the impact of Covid-19 and Brexit

Group sales for the 26 weeks to December 27 decreased by 8.5% to R9.7bn from R10.6bn in the previous comparable period
Companies
2 months ago
Next Article

Compromise at Tiffany’s as LVMH gets a discounted deal

Compromise at Tiffany’s as LVMH gets a discounted deal