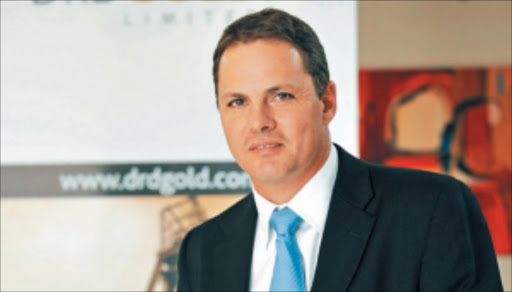 Power-related problems shaved R27m off DRDGold’s interim revenue, contributing towards a slide into a loss for the period in which the tailings retreatment specialist began a new project.

DRDGold recorded a R46m loss for the six months to end-December compared with a profit of nearly R61m in the same period a year earlier.

DRDGold said it had lost production of 49kg directly related to power disruptions, including a fire at a substation, a lightning strike damaging a transformer at one of the miner’s sites and blackouts during the six months.

Based on an average received gold price of R554,760/kg for the period, the value of the lost production was R27.2m.

DRDGold produced its gold at an all-in sustaining cost of R551,131/kg, a figure skewed by the inclusion of the new project, compared with R500,125/kg a year ago.

DRDGold has concluded a deal with Sibanye-Stillwater to acquire its vast tailings dumps to the west of Johannesburg in exchange for a 38% in the dedicated tailings recovery company.

The first phase of developing a tailings retreatment business on these assets is nearing completion and DRDGold bumped up its full-year gold output target to between 157,000oz and 165,000oz from an earlier guidance of up to 154,000oz.

The cash operating cost in the full year is forecast to be about R500,000/kg.

“With Far West Gold Recoveries off to a flying start, we look forward to the benefit of its contribution in the second half of financial year 2019,” said CEO Niel Pretorius, who noted Eskom, the dysfunctional state-power utility, was the company’s biggest risk.

The flagship Ergo retreatment business had a difficult six months, with the power disruptions, trucking costs and lower grades.

This instrument was designed to reduce the financial risk stemming from the development of the West Rand business, which already has processing plants and a critically important deposition site for fresh tailings.

DRDGold has spent R232m on the project so far.

Sibanye-Stillwater’s consolidation of the local mining sector continues unabated with the finalisation of an asset swap in exchange for shares in ...
Companies
3 years ago

The company’s gold mines continue to struggle, with sharp falls in output and soaring costs after a disastrous start to 2018 with more than 20 miners ...
Companies
3 years ago

How DRDGold scored another jackpot

How DRDGold scored another jackpot