Plane maker targets 42 jets a month later in 2022, sources say, after production was halted in 2019 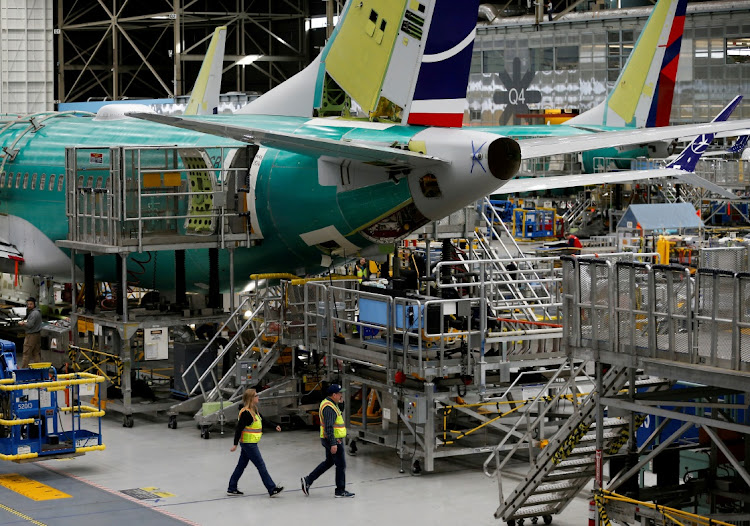 Employees walk by the end of a 737 Max aircraft at the Boeing factory in Renton, Washington, the US. Picture: REUTERS/LINDSEY WASSON

Seattle/Paris — Plane maker Boeing has drawn up preliminary plans for a fresh sprint in 737 Max output to as many as 42 jets a month later in 2022, industry sources said.

The plans would extend the US company’s recovery from overlapping safety and Covid-19 crises and lift output beyond an early 2022 target of 31 a month, which the sources said Boeing aims to reach in March.

Implementation will depend on demand, the health of suppliers and Boeing’s success in reducing a surplus of jets already built.

Boeing declined to comment and pointed to its latest guidance. In April it reaffirmed plans to raise Max output from an unspecified “low” rate to 31 a month by early 2022.

Production was halted in 2019 after Boeing’s fastest-selling model was grounded in the wake of fatal crashes. It resumed last May at a fraction of its original pace while Boeing navigated regulatory approvals and a fragile supply chain.

It is still awaiting the go-ahead from China after winning Western approvals late last year. CEO Dave Calhoun has warned that the timing of remaining approvals will influence the shape of Boeing’s final production ramp-up.

As an interim step, Boeing hopes to speed monthly output from single digits now to about 26 a month by the end of 2021 at its Renton factory near Seattle, two of the sources said.

The Puget Sound aerospace industry has already started to pick up steam. Sources say Boeing has been placing parts orders again, while fuselages can be seen heading by rail to the Seattle area from the Wichita factory of Spirit AeroSystems.

That comes as demand for medium-haul jets such as the 737 Max and competing Airbus A320neo begins to recover from the effects of the Covid-19 pandemic, boosted by widespread vaccinations, especially in the busy US domestic market.

However, several US and European suppliers view the production plans of both plane makers as optimistic, saying that concerns remain over the health of the global aerospace supply chain.