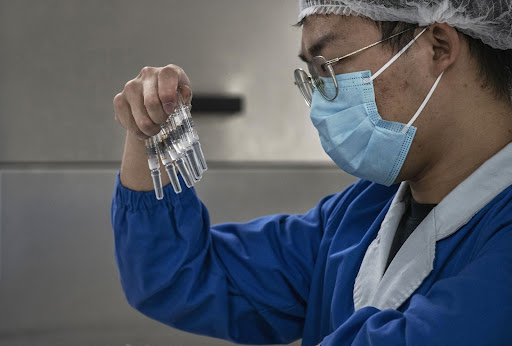 New York — Wuxi Biologics, a Chinese company that makes ingredients for AstraZeneca's Covid-19 vaccine, may be a step closer to being taken off a US trade list that it landed on five months ago, wiping HK$77bn ($9.9bn) off its market value at the time.

Chinese authorities allowed a US export control officer to conduct inspections of at least one company in the city of Wuxi last week, a US commerce department official said.

The official declined to identify the company or companies involved, but a person familiar with the matter told Reuters a check was conducted last week at Wuxi Biologics.

If the US deems the check favourable, it could be removed from the list.

The company did not respond to requests for comment. Shares in Wuxi Biologics jumped as much as 12.2%, its highest since Jan. 24, on Tuesday after the news.

Wuxi Biologics units in Wuxi and Shanghai were among 33 entities added to the US commerce department's “unverified list” in February. The company was one of only two added to the list with addresses in Wuxi.

The US placed the entities on the list because it could not conduct on-site inspections to verify information related to them and US items shipped to them.

The resumption of inspections is seen by the US as a positive development amid increased tensions with China over a range of issues, including the US blocking of imports linked to forced labour in China and the possible delisting of Chinese companies that don't meet audit requirements.

Last week, there also were renewed threats to shut down SMIC, China’s top chipmaker, if it is found to be supplying Russia in violation of US export controls.

“I do have some good news,” the Commerce department official, who could not be identified publicly, told a conference on export controls in Washington on Thursday.

“We were able to get some end-use check movement this week in Wuxi.”

The official added that hopefully a US export control officer would be able to go into another province, Anhui, in the coming weeks, though that could be delayed by fresh Covid-19 outbreaks.

US inspections of Chinese companies require approval and scheduling by China's commerce ministry, the US official said.

China’s zero tolerance Covid-19 protocols account for most of the delay over the last couple of years, though there were some opportunities to have conducted checks, the official said.

“Covid-19 aside, it's really dependent on them to agree to schedule the pending end-use checks that we have,” the official said.

China's commerce ministry did not respond to a request for comment.

In February, US assistant commerce secretary Matthew Axelod said the additions to the list “signal to the PRC government the importance of their co-operation in scheduling end-use checks”.

But China’s ministry of commerce criticised the development and said Washington should correct its “wrongdoings,” return to the track of co-operation and contribute more to the global economic recovery.

During an investor day on June 16, Wuxi Biologics said that it hoped to see the “unverified list” issue resolved for at least one of its units by September, and for the other by the end of the year.

The company said it had initially expected an inspection in April, which was disrupted by Covid-19. It said it had not seen a significant effect on actual operations from being added to the list.

US exporters can engage with parties on the unverified list, but are required to conduct additional due diligence before they can ship goods to them, and may need to apply for more licences.

Citi analysts said in a report on Tuesday that the company’s management had noted the result of the checks could be positive but that they were still waiting for final confirmation.

“In our view, the potential removal of Wuxi site from the [unverified list] would help alleviate market concerns on geopolitical risk and boost market sentiment on the CRO [contract research organisation] sector,” they said.

Both Omicron-modified vaccine candidates have safety and tolerability profiles similar to the original vaccine, Pfizer and BioNTech say
News
1 month ago

Spain, Portugal, Germany and Belgium are set to receive doses purchased by the bloc’s new health authority
News
1 month ago
Next Article