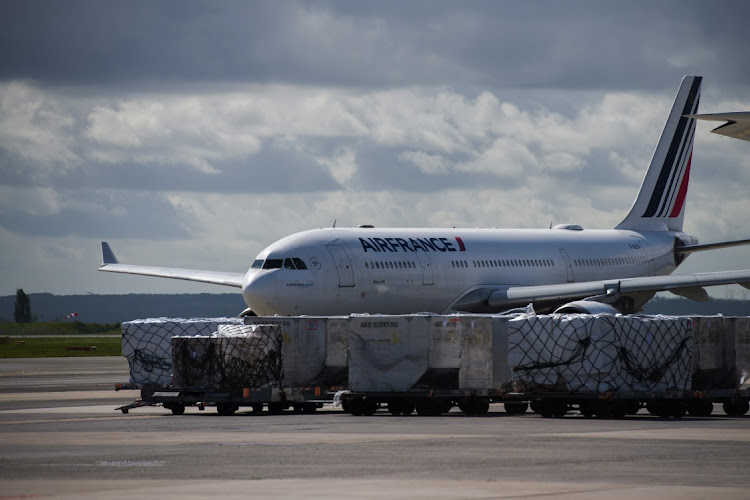 Cargo on trolleys beside an Airbus SE A330 passenger aircraft, operated by Air France-KLM, at Charles de Gaulle airport on May 10 2021. Picture: NATHAN LAINE/BLOOMBERG

Carriers are pushing to retain the Carbon Offsetting and Reduction Scheme for International Aviation (Corsia) over the EU’s more rigorous Emissions Trading System, the think tank-said on Thursday. While Corsia was developed by the UN-mandated International Civil Aviation Organization, a recent EU report said offsets are priced too cheaply to act as a brake on emissions.

Aircraft manufacturer Airbus meanwhile told EU officials in February that hydrogen-powered aircraft with more than 150 seats probably won’t feature globally until 2050, according to a presentation obtained by InfluenceMap via a freedom-of-information request.

Carriers are also urging the EU to delay moves to sustainable aviation fuel (SAF), it said, with Air France-KLM backing compulsory use only as technology matures, Deutsche Lufthansa claiming competitiveness issues, and British Airways owner IAG saying SAF should be required only for intra-Europe flights.

The International Air Transport Association said the report was a distortion of “genuine and long-standing sustainability efforts”, while A4E, which represents Europe’s leading airlines, said it failed to reflect the actions and investments of a sector that contributes 2.4% of total global emissions.

The dissection of the aviation industry’s stance on carbon curbs highlights how pressure to accelerate efforts to meet increasingly tougher climate goals has ratcheted up. While automakers and some industrial sectors have made strides in slashing emissions, airlines face a tougher challenge in going green given the energy expenditure required to get passenger jets airborne.

Airlines are also using the coronavirus crisis, which has roiled air travel, in an effort to delay taxes designed to push them into reducing emissions, according to InfluenceMap, which said it researched Europe’s 10 largest operators, together with Airbus, Boeing and leading trade groups. Only EasyJet has shown “more positive engagement” with the issue, it said.

Airbus said last September it was working on three concepts for a hydrogen-powered plane that could enter service from 2035, including a traditional turbofan model designed to carry 120 to 200 passengers.

According to the EU submission published by InfluenceMap, it could take until 2040 for aircraft with 100 to 150 seats — below the size of a standard Airbus A320 or Boeing 737 — to be deployed with electric or hydrogen power, while a mid-range plane of up to 250 seats probably wouldn’t use hydrogen until 2050.

Only a 50 to 100 seat regional aircraft would be ready for hydrogen in the 2030s, the submission to European Commission executive vice-president and climate chief Frans Timmermans says.

Airbus declined to comment on what it called a private exchange, while saying that decisive joint actions are required by governments and industry to develop green technologies. In the shorter term, a reduction in emissions could be achieved by helping airlines fund a switch to new planes using 25% less fuel.

IAG said it has supported the EU’s Emissions Trading System since its conception in 2008, but that with Europe producing only a small proportion of emissions, a global programme like Corsia is needed. Air France-KLM declined to comment on the InfluenceMap report, while Lufthansa couldn’t be reached.

If business helps to speed up vaccination, SA could open up as soon as October rather than mid-2022
Opinion
1 month ago