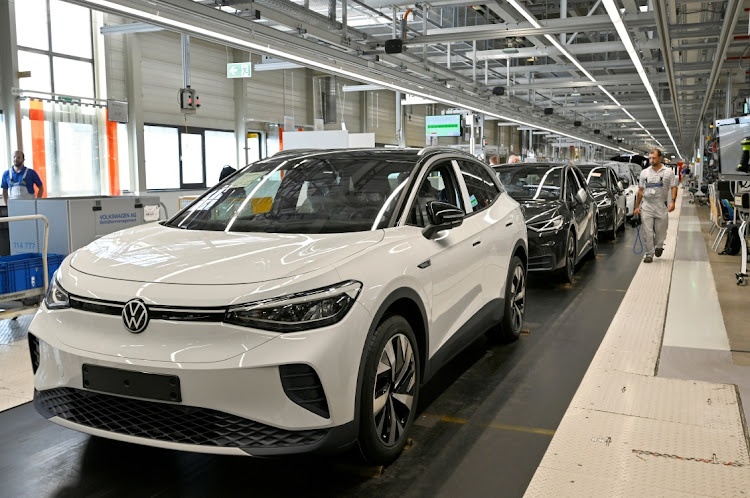 Frankfurt — Volkswagen has softened its stance on tough new European carbon dioxide emissions targets for carmakers, betting it can absorb more stringent cuts than its rivals, sources familiar with the matter said.

The EU in April raised its target for cuts in net greenhouse gas emissions to 55% by 2030 from 1990 levels instead of 40% and Europe’s carmakers will find out in July what their contribution on CO2 emissions is expected to be.

Three sources said that Volkswagen — which owns car brands including Porsche, Audi, VW, Seat and Skoda — is quietly letting policymakers in Brussels know that it would support more ambitious cuts in emissions than other car manufacturers.

While the sources did not say what specific targets Volkswagen would be comfortable with, the move by Europe’s biggest carmaker is undermining and upsetting smaller rivals that want Brussels to give them more leeway.

“This has become a quest for survival,” one person familiar with the carmaker said. “You can’t wait for others to eventually catch up.”

Asked about its stance on CO2 emissions, Volkswagen said it has already signalled its support for ambitious CO2 cuts in the past, adding this would require an expansion of electric vehicle charging infrastructure and renewable energy.

The company said it expects the European Commission to recommend a 50% cut in fleet-wide CO2 emissions for passenger cars by 2030, adding this is the level it has prepared for.

Volkswagen has set itself a 2025 deadline for overtaking US pioneer Tesla and becoming the world’s biggest seller of electric vehicles (EVs), a plan that includes building six battery factories in Europe alone by 2030.

Volkswagen CEO Herbert Diess has reasons to be aggressive.

The German carmaker took an early decision to build a common platform for EVs, it has a cash pile of €24bn and is fast clawing market share for mass-market EVs away from early leaders such as Renault.

With its manufacturing and financial muscle, Volkswagen could reach full manufacturing cost parity between electric and conventional cars by 2025, analysts at Swiss bank UBS say.

Tensions over emissions cuts came to a head at a board meeting of the European Automobile Manufacturers Association (Acea) in March, two people familiar with the matter said.

Several CEOs said they were concerned about the prospect of tougher EU standards, as they could blow a hole in profits from fossil-fuel engines that could not yet be plugged by electric vehicles, the two people said.

But Diess took a more upbeat view, saying his company’s EVs will achieve cost parity by the mid-2020s, a comment that raised eyebrows among fellow CEOs at the meeting including Renault’s Luca de Meo, one of the people said.

Renault and Volkswagen declined to comment on the meeting.

The Acea said it does not report on details of discussions that take place during its board meetings.

“What we can report, however, is that during this meeting, all CEOs agreed that they are open to higher CO2 reduction targets for cars in 2030, provided that these targets are directly linked to binding commitments from member states to roll out the required charging points and hydrogen stations,” the association said.

But some Acea members, such as Volkswagen, are able to absorb deeper cuts than others, the people familiar with the meeting said, pointing out that while the association is open to more ambitious targets, it has not given a firm number.

The European industry must deliver fleet-wide cuts in emissions of 37.5% by 2030 for new passenger cars from 2021 limits — equivalent to a reduction from 95g CO2 per km this year to 59g/km at the end of the decade.

One person familiar with the matter said the industry is now bracing for this target reduction to rise to at least 50% when the European Commission unveils its plans.

That could even rise to 55%, or more, as the legislation goes through the European parliament, the person said, potentially squeezing some of the weaker European players with lower pain points regarding emissions.

Premium carmakers can get away with meeting tougher emissions standards by pursuing both electric vehicles and combustion engines, simply because some clients will always be prepared to pay more for luxury electric vehicles.

But it’s different for the mass market in which affordability is key, so Volkswagen was forced to devise a strategy to build affordable and profitable EVs for the masses quickly.

It introduced a modular electric-drive platform, known as MEB, ahead of its European rivals and it now underpins electric EVs under a variety of its brands, including Audi, VW and Skoda.

“Five years ago, we decided to build a single platform for electric cars. Many in the industry questioned our approach,” Diess told Volkswagen’s Power Day in March. “Today, they are following suit, while we are reaping the fruit.”

Taking a page out of Volkswagen’s book, Renault’s De Meo, a former Volkswagen executive who turned the Seat brand around, is now banking on its electric platforms known as CMF B-EV and CMF A to produce small and affordable EVs.

In the first quarter of 2021, Renault’s share declined further to 15%, tying with Tesla for third place behind Volkswagen on 21% and Stellantis on 17%, according to EV-Volumes.com.

“Renault has held a strong position within the European BEV [battery electric vehicles] market for several years now. That said, with launches from peers such as VW and Stellantis, we believe this leadership is coming under increasing attack,” Barclays analysts said.

EV champions can even make a business selling credits to heavy emitters. Tesla, for example, sold Italy’s FCA European and US CO2 credits worth €2bn from 2019 to 2021, and green credit sales helped boost its first-quarter revenue.

FCA’s merger with France’s PSA to form Stellantis, however, has brought an end to its need for Tesla credits in 2021, thanks to the French carmaker’s electric technology, Stellantis said on Tuesday.

Concerns that Renault, among others, might have a tougher time than some in meeting stricter emission standards, however, is hitting a nerve in the French government, which has a 15% stake in the carmaker.

“Some proposals are going too far,” he said.

The imperative of a people-centred transition already features in the Integrated Resource Plan, with policies needed to upskill people to service and ...
Opinion
5 months ago
Next Article