The central bank stock, which pays a tiny dividend and holds no voting rights, jumps by the daily limit for a fourth straight session 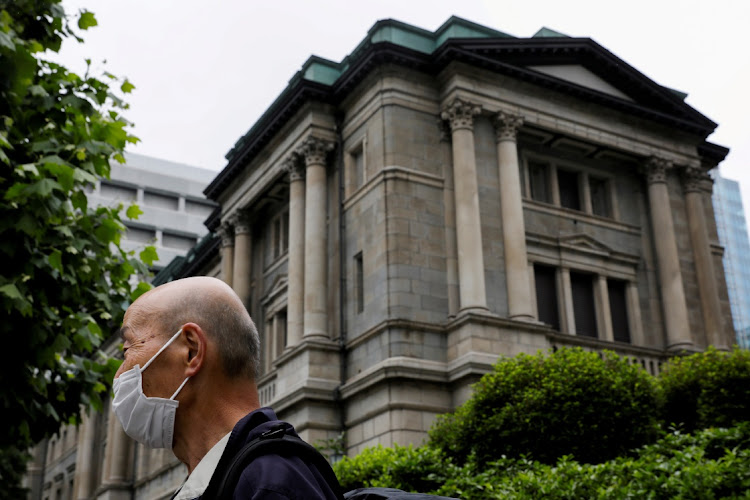 A man wearing a protective mask stands in front of the headquarters of the Bank of Japan in Tokyo, Japan. Picture: REUTERS/KIM KYUNG-HOON

Tokyo — The Bank of Japan’s (BOJ's) stock jumped by the daily limit for a fourth straight session on Thursday, almost doubling in value over the course of this week.

While Thursday’s trading volume of 11,600 shares is minuscule compared with most other listed companies in Tokyo, it was the highest on record for Japan’s central bank, according to data compiled by Bloomberg.

The surge in the shares, or subscription certificates as the BOJ refers to them, has baffled market participants. While the BOJ is unusual in being a listed central bank, the stock pays a tiny dividend and holds no voting rights. In fact, the central bank doesn’t even hold shareholders’ meetings. The stock traded at an all-time low just in January.

While technically a listed entity on the Tokyo Stock Exchange’s Jasdaq, the nature of the stock and its speculative moves are a long-standing mystery of Japan’s financial markets. A speculative surge was also witnessed in late 2012 and early 2013, when optimism over the Abenomics programme of former prime minister Shinzo Abe was at its peak.

The government holds a 55% stake, while individual investors have 40%. The subscription certificates can’t be bought at online securities firms, as they weren’t subject to the 2009 digitalisation of traditional paper stock certificates. It’s the only issue for which Japan Securities Clearing Corporation, the entity that clears transactions for all equities in the country, still requires physical delivery of paper certificates, which remain valid even now.

The puzzling rally comes after the Nikkei 225 Stock Average briefly touched its highest levels since the bubble era of the 1980s. In those days, when the benchmark traded at about 70 times earnings, some investors collected BOJ’s stock, framing their certificates as a collectible. They were then worth ¥745,000 ($6,945) apiece — about 14 times their current value — despite the recent surge.

The gains have come ahead of a closely watched policy review by the central bank on March 19, which may lead to changes in how it buys exchange traded funds — because as well as being listed, the BOJ is itself the largest single owner of Japanese shares.

Shares have almost doubled since listing at end-December, giving it a market cap of about $700m
Companies
2 months ago