SpaceX’s final frontier before ferrying astronauts to the ISS 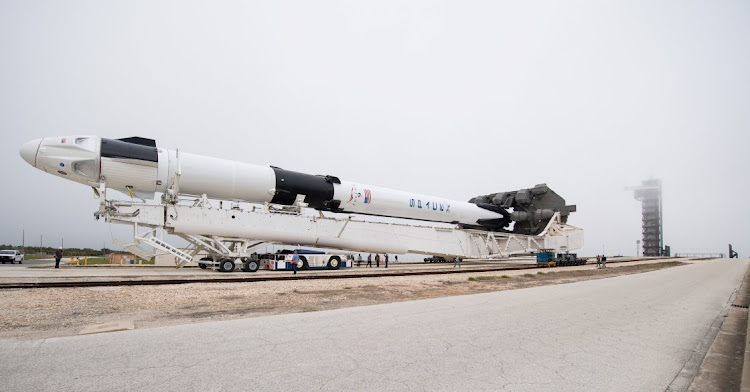 A SpaceX Falcon 9 rocket with the company's Crew Dragon spacecraft on board rolls out at Launch Complex 39A at the Kennedy Space Centre in Cape Canaveral, Florida, US, February 28 2019. Picture: NASA VIA REUTERS/JOEL KOWSKY

San Francisco — Elon Musk’s rocket company has one last, major hurdle to clear before it attempts an historic first flight of astronauts for Nasa: proving it can safely abort a mission if something goes wrong after take-off.

A Falcon 9 rocket with Crew Dragon spacecraft is slated to launch from Kennedy Space Centre in Florida at 8am local time on Saturday. Shortly after lift-off, SpaceX will demonstrate Dragon’s ability to eject from the rocket during an emergency. The inflight abort test will include a series of complex manoeuvres before Dragon’s parachutes should deploy and the craft splashes down in the Atlantic Ocean.

“You design this with the hopes that you never have to use it, but this is showing that it works in the real world,” said former astronaut Garrett Reisman, former director of space operations at SpaceX and a professor of astronautics at the University of Southern California.

The procedure is the final big test before Nasa can certify that SpaceX is ready to ferry astronauts to and from the International Space Station (ISS). US Air Force colonel Bob Behnken and former Marine Corps test pilot Doug Hurley will be Dragon’s first passengers.

“There’s a lot riding on this,” said Reisman, who is an adviser to SpaceX.

Americans have not flown into space aboard a US craft since the shuttle programme ended in 2011. Sending astronauts to the ISS  is also an important step for Musk’s California-based company. The billionaire CEO aims eventually to transport people to the Moon and Mars.

Nasa will hold a pre-launch news conference Friday at 1pm New York time with Kathy Lueders, the manager of Nasa’s commercial crew programme, and Benji Reed, SpaceX’s director of crew mission management. It will be broadcast on Nasa TV.

Nasa awarded SpaceX and Boeing a combined $6.8bn in contracts in September 2014 to revive America’s ability to fly to the ISS without buying seats on Russian Soyuz capsules. Since then, the agency and both companies have suffered delays that have put the programme more than two years behind schedule.

In December, Boeing’s Starliner failed to dock with the ISS because of a problem with the mission’s timing software. The Chicago-based company and Nasa are investigating, and the agency will decide if Boeing needs to perform a second flight without crew.

SpaceX’s Dragon capsule successfully docked with the ISS in March as part of its Demo-1 test.

Picturing the universe and listening to the sound of stars

Among the most intriguing visuals produced by contemporary astronomy are not those that have been cropped and translated into pretty images, writes ...
Life
1 year ago