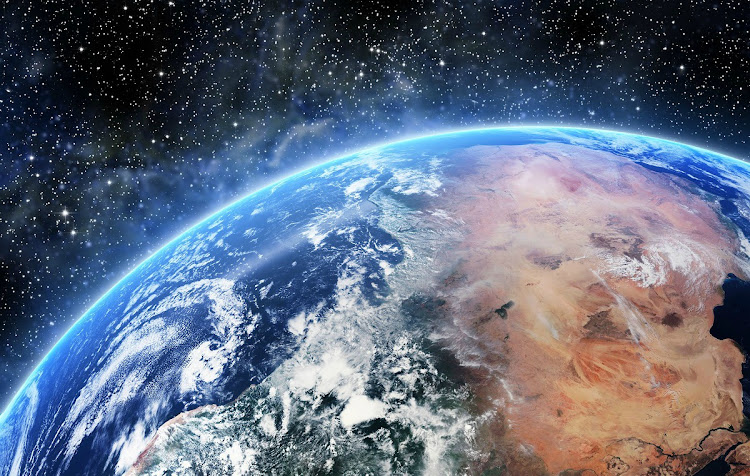 A view of Earth from space. Elements of this image have been furnished by NASA. Picture: 123RF/ROBERTSROB

Tbilisi — Tired of your ordinary earthly vacations? Some day soon you might be able to board a rocket and get a room with a view — of the whole planet — from a hotel in space.

At least, that is the sales pitch of several companies racing to become the first to host guests in orbit on purpose-built space stations.

“It sounds kind of crazy to us today because it is not a reality yet,” said Frank Bunger, founder of US aerospace firm Orion Span, one of the companies vying to take travellers out of this world.

“But that's the nature of these things, it sounds crazy until it is normal.”

US multimillionaire Dennis Tito became the world's first paying space tourist in 2001, travelling to the International Space Station (ISS) aboard a Russian Soyuz rocket for a reported $20m. A few others have followed.

Since then, companies such as Boeing, SpaceX and Blue Origin have been working on ways to bring the stars into reach for more people — opening up a new business frontier for would-be space hoteliers.

US space agency Nasa announced in June that it plans to allow two private citizens a year to stay at the ISS at a cost of about $35,000 (about R513,500) per night for up to a month. The first mission could be as early as 2020.

But the growing movement has raised questions about the adequacy of current space laws, which mainly deal with exploration and keeping space free of weapons, not hotels and holidaymakers.

“It is difficult now to want to do things in space and get a clear answer from [space law]," said Christopher Johnson, a space law adviser at the Secure World Foundation, a space advocacy group.

“For something as advanced as hotels in space there is no clear guidance.”

Orion Span plans to host the first guests on its Aurora Station — a capsule-shaped spacecraft roughly the size of a private jet — by 2024, said Bunger.

Accompanied by a crew member, up to five travellers at a time would fly up to the station for a 12-day stay costing at least $9.5m per head, he said.

In orbit, guests would take part in scientific experiments, enjoy some 16 sunrises and sunsets a day and play table tennis in zero gravity, he said, adding about 30 people had already put down a $80,000 deposit to save a seat.

“We haven't seen this kind of excitement about space since the Apollo era,” Bunger told the Thomson Reuters Foundation by phone.

Californian company the Gateway Foundation is hoping to build a huge space station able to sleep more than 400 people — including tourists, researchers, doctors and housekeepers.

Solar-powered and shaped like a wheel, the station would spin around its core to create artificial gravity on its perimeter, equal to about one-sixth of that on earth, said its architect Tim Alatorre.

“The problem is that you can only spin so fast before you start feeling sick,” he said. “We could easily create earth gravity on the station by spinning it faster but you wouldn't be very comfortable.”

The group aims to complete the station, named after Wernher von Braun, the former Nazi rocket scientist who later worked on the US Apollo programme, by 2028.

Without disclosing how much a space holiday would cost, Alatorre said the goal was to make the station “accessible to the everyday person”.

Yet that could take time to become a reality, said Lucy Berthoud, a space engineering professor at Britain's University of Bristol.

“The launch cost is the bottleneck for anyone who is doing this kind of enterprise,” she said.

For example, Nasa is expected to pay more than $50m per seat to launch astronauts into space with Boeing and SpaceX rockets.

“It will take an increase in competition between launchers and a jump in technology to significantly lower costs,” said Berthoud.

In recent years, several companies — including Spain's Galactic Suite and Russia's Orbital Technologies — have failed to live up to their pledges to host guests on orbiting hotels by now.

The law is another hurdle for space hotels to lift off. The rush of speculation in space has revealed gaps in international laws and treaties governing its use and sparked calls for greater oversight.

Life far from earth is mainly regulated by the 1967 Outer Space Treaty, which bans countries from claiming space and celestial bodies for themselves but allows for their use for peaceful purposes — opening the door to business exploitation.

But firms would need authorisation from a state, normally the one where they are incorporated, to launch a hotel in space, said Tanja Masson-Zwaan, space law professor at Leiden University in the Netherlands.

Authorising governments would also have to continuously supervise each space station's activities, she said.

And all states involved in the creation and launch of a space station are liable in perpetuity for any damage the station might cause — if it were to crash into a satellite, for example.

That responsibility could make governments wary of supporting such ventures in the first place, said Masson-Zwaan.

“I don't think there will be many states that will accept to authorise and supervise this kind of activity as long as it is not super-safe,” she said.

The regulations that do exist are outdated and problematic to potential space hoteliers, noted Bunger of Orion Span, pointing to the Aurora Station project as an example.

Because the station will have some thrust capability to help it stay in orbit, it falls under a 40-year-old US set of rules on defence goods conceived mainly to prevent sensitive arms technology being sold to countries deemed to be a risk, he said.

Those rules have requirements on transparency and disclosure that have more to do with ballistic missiles than space holidays, Bunger said.

“Clearly this is not a weapon,” he said of the station.

“There is not one government in the world that has caught up to the reality that tourists are trying to go into space,” he said.

People had great expectations from the annual World Artificial Intelligence Conference, but Musk repeated himself and ‘Jack Ma was Jack Ma’
World
2 years ago

Nasa’s Artemis programme has a deadline to put people on the moon in 2024 — it’s going to be tight, if it’s doable at all
World
2 years ago
Next Article